“However the danger exists that the more important and more fundamental fact may be lost sight of that the land plane bases and the operating units thereon should be available in supporting positions before the operation is undertaken at all. It is only by this provision in advance that the risking of carriers in restricted covering positions can be avoided.” Adm  Bull Halsey 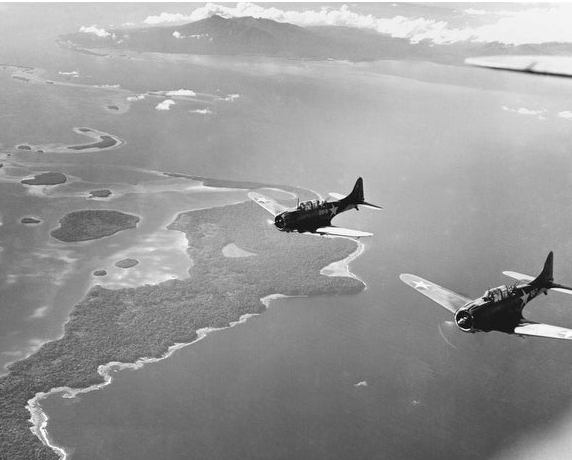 The term “land based” in regard to World War II requires some context.  Of note is the differences between how air power was applied in European  and the Pacific theaters.

The game plan for the eventual focus on Japan included a two pronged attack progressing through the islands of the central Pacific under Admiral Chester Nimitz and a southern approach under General MacArthur. While a major objective was to capture (or build) airfields within range of mainland Japan for heavy bombers (B-29s) as in European bomber commands, this required a different operational approach for land-based air in the early days.

Particularly in the Pacific in 1942 use of bombers and patrol planes has to be viewed in the context of supporting the naval needs of amphibious and carrier based operations. And as noted previously, the use of land based fighters and dive bombers has to be seen as not only defending their base itself but in support of sea operations.  Ground, sea, and air – land and carrier – were completely interdependent in the initial island hopping action. This post discusses this last aspect of land-based air. Cactus Air Force aspects are addressed briefly but have been discussed in Part #15/4 and next in Part#28/5 on close air support.

Given the “Europe First” strategy, the Guadalcanal Campaign fell out through two lines of  logic: 1) maintaining lines of communication and support between the U.S. and Australia; and 2) beginning offensive measures up through  New Britain, New Ireland, and the Solomons for capture of the Japanese stronghold of Rabaul.  Air bases were needed to support both.

In early March  Admiral Ghormley was appointed commander of a new organization in the Pacific theater – South Pacific Area. He had no major naval units under his command. The question of airpower overshadowed all  other calculations. he suffered deficiencies in both suitable aircraft and even rudimentary bases.

Admiral John McCain was assigned to Ghormley as Commander, Aircraft, South Pacific COMAIRSOPAC in May 1942.  He would command all land-based Allied air operations in the Solomon Islands and south Pacific area with tasks to cover the lines of communication with Australia, and to support the Guadalcanal campaign This would eventually include Henderson Field and the Cactus Air Force.

After the victory at Midway Admiral King had pushed hard to go on the offensive. Fighting off General MacArthur’s similar thinking with him in charge, King finally convinced General Marshall to accept his approach and only on 3 July met with Admiral Nimitz and began serious planning for an attack in a month. At that point Guadalcanal was not even necessarily the prime target. The intelligence that Japan had started to build an airstrip there probably cemented the final targeting selection.

For the Guadalcanal assault McCain’s command was designated as Task Force 63. Toward the end of July, when his tactical plan for Task Force 63 was completed, South Pacific air strength had increased and the air bases had been improved. Espiritu Santo became operational the end of July but it was located  over 550 miles away,  too far to directly support the Marines on Guadalcanal with fighters or dive bombers.

Earlier in July concern had been expressed by MacArthur and Ghormley by Japanese build up of land based air at Kavieng, Rabaul,  Lae, Buka, Salamaua, and the start of the build at Guadalcanal. This combined force could bring overwhelming aerial strength against attacks into  the Solomons, and created a major threat for carrier operations supporting the amphibious assault.

The navy’s original plan depended on pre-invasion bomber raids against Rabaul and the auxiliary airfield at Buka, but a strong effort turned out to be  far beyond the capability of MacArthur’s hard-pressed flyers. Now he agreed only to attack Rabaul from D-Day to D+3 and bomb enemy naval forces if detected within 550 miles of Port Moresby.  Ghormley warned Nimitz on 29 July, “U.S. forces under MacArthur are not as strong as I expected,” and charged that Washington did not recognize that weakness. 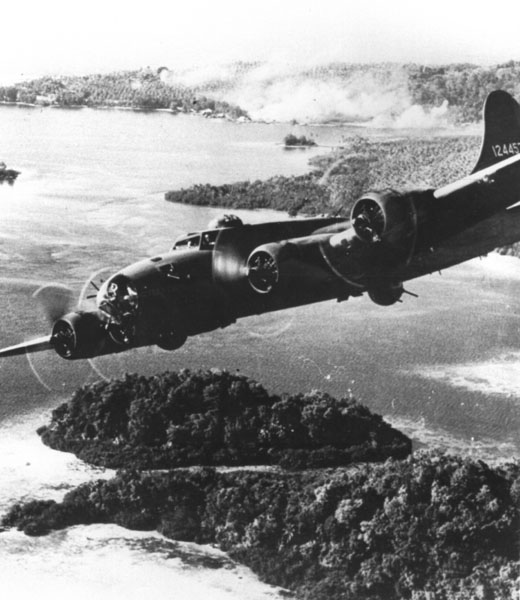 Admiral McCain divided Task Force 63 into seven task groups.  The air searches of Task Force 63 would thus cover the general area between New Caledonia and the Solomons, over the Solomons, east to Ndeni, and south to the Fijis. General MacArthur agreed to have Southwest Pacific air forces patrol the northern and western approaches to the Solomons.

Unfortunately, the fruits of the wide web of air searches, performed by PBY Catalinas and B-17s  withered under pressure from bad weather, the shortcomings of human senses, poor coordination, and the vagaries of radio reception. Though the physical reach of the search planes was impressive—PBYs from Malaita could easily reach Rabaul, 650 miles away – aircraft from MacArthur’s Southwest Pacific Command could not communicate directly with the South Pacific Area naval units.

Coverage of the Slot on the afternoon of August 8 was a particularly egregious failure. Turner had asked  McCain, to supplement MacArthur’s patrol coverage of the critical waterway. As it happened, McCain’s aviators were blocked by bad weather from flying the missions, but his message to that effect did not reach Turner until nearly midnight on the ninth. Had he known that his eyes in the sky could not fly, he might have alerted the ships paroling around Savo Island under Admiral Crutchley to the possibility of a naval attack that night. He might also have requested that Fletcher use his carrier planes to fill the gaps in the search net.

The principal task of  the land based aircraft was to warn of ships advancing southeast from Rabaul, south from Truk, or southwest out of the Marshalls. The fast, well-armed B-17s hunted eight hundred miles and the PBYs, flying from sheltered inlets, could go out seven hundred miles.  But their air bases were distant from Guadalcanal, 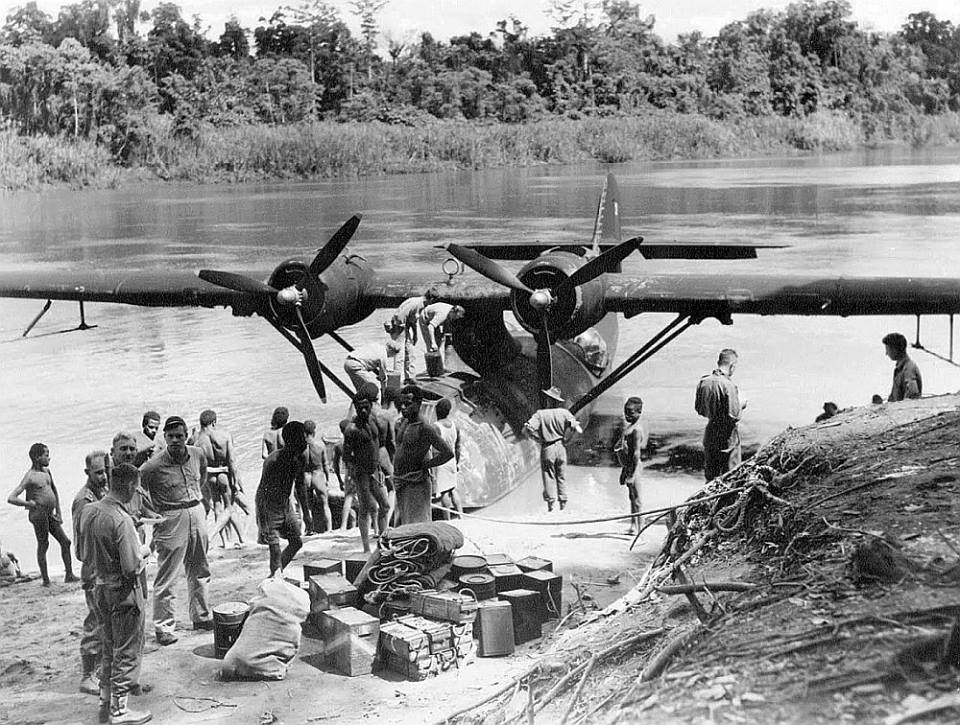 greatly restricting how far his planes could roam beyond the invasion area. This  drastically shortened the margin of warning the carriers of TF-61 could receive of any impending attack. Long delays persisted in forwarding search results. McCain’s 9 August summary (“all sectors negative”) did not go out until 0114 on the tenth.

As soon as Fletcher could circumvent radio silence by flying messages ashore, he requested McCain to send “as soon as possible after completion searches,” the “negative and positive information and percentage of coverage.” In turn Ghormley explained  “[The]retired position [of ] our carriers while awaiting enemy attack with relation distance Rabaul to enemy objectives makes necessary they receive information [of ] enemy naval surface movements [at the] earliest moment.”

The Guadalcanal Watchtower offensive was accurately described as proceeding on a shoestring. The Joint Chiefs would take no assets from the European effort and planning time as mentioned previously was very short. Nothing highlights the impact more than the failure to have land-based planes ready to operate from Guadalcanal.

Admiral Fletcher (TF 61) was convinced that a carrier engagement would determine the fate of the Marines on the island.  Without timely reporting and warning  by the surveillance aircraft or land based fighters he considered his three carriers vulnerable in the extreme to land based air, submarines and an undetected carrier attack. This then led to his withdrawal to the southeast. Henderson Field would not have tactical a/c until the 20th.

Fletcher strongly advised in his 24 September analysis of carrier operations that bases for land-based aircraft should be established, “Within the shortest possible distance of the objective prior to any invasion effort.” Land planes should stage into the objective as soon as the airfield was ready to take over air defense and release the carriers to withdraw.

The question of protecting the carriers off Guadalcanal was much more complex than one might infer from Fletcher’s critics.

Ghormley’s assessment closely reflected Fletcher’s own thinking. Enemy carriers remained foremost in Fletcher’s mind, as he prepared to wage the big battle he must win to retain control of imperiled Cactus.

Despite the losses over the course of the Guadalcanal Campaign, having the Marine, Navy, and Army Air Corps aircraft at Henderson Field was of immense importance in a close won victory.

The Cactus Air Force has been discussed in Part #15/4, so, here from the Foreword to Lundstrum’s book by Navy Ace CDR. Alex Vraciu, USN (Ret.):

One of the most fascinating chapters of the carrier war in the Pacific was the magnificent exploits of a small number of naval aviators who played a vital role in helping bring to a standstill the powerful Japanese thrust in the southern Solomons. Orphaned by costly carrier sea battles, including the sinking of the Wasp and Hornet and battering of the Enterprise, these much-needed fliers and their aircraft were gratefully welcomed ashore to operate alongside their Marine and Army Air counterparts from a rough-and-ready jungle airfield located precariously near the front lines on Guadalcanal. They provided a terrific boost to the beleaguered shore-based contingents holding the line. After a crucial three-month series of bitter, retaliatory air battles, this CACTUS Air Force succeeded; a determined enemy was forced to abandon its plans to retake Guadalcanal.

Midway didn’t mean we had all the answers for carrier aviation or its support roles, particularly when tied to a “box” defined by staying close to an invasion/occupation site which created  significantly different requirements from open ocean ops looking at CV ops in light of need to support the land campaign Learn carrier warfare on the job:  CV vs Cv was one thing, support of amphibious ops and then long term support was quite another.

There was a real dichotomy of needs for 1) maintaining maneuverability meaning sea space/open waters for carrier battles and 2) staying within range of the land forces while operating within range of land-based air, submarine forces and potential enemy carriers.

But land-based air for scouting, ship and land attack and defense for all parties was crucial to success against a determined enemy.