The U.S. Navy’s carrier fighting squadrons took particular pride in their own contribution during the first fourteen crucial weeks, from 7 August to 15 November 1942. At heavy cost VF-5, VF-6, and VF-71 provided fighter support during the initial two days of the amphibious invasion, the first time they attempted such a difficult endeavor. In August and October, VF-5, VF-6, VF-72, and VF-10 fought two desperate carrier slugging matches whose level of ferocity was seldom equaled until the Kamikaze onslaught of 1944–45. Beached when their carriers were sunk or heavily damaged, VF-5 and VF-71 joined the 1st MAW at besieged Henderson Field, pitching in during one of Marine aviation’s proudest exploits.

John B. Lundstrom, First Team and the Guadalcanal Campaign: Naval Fighter Combat from August to November 1942 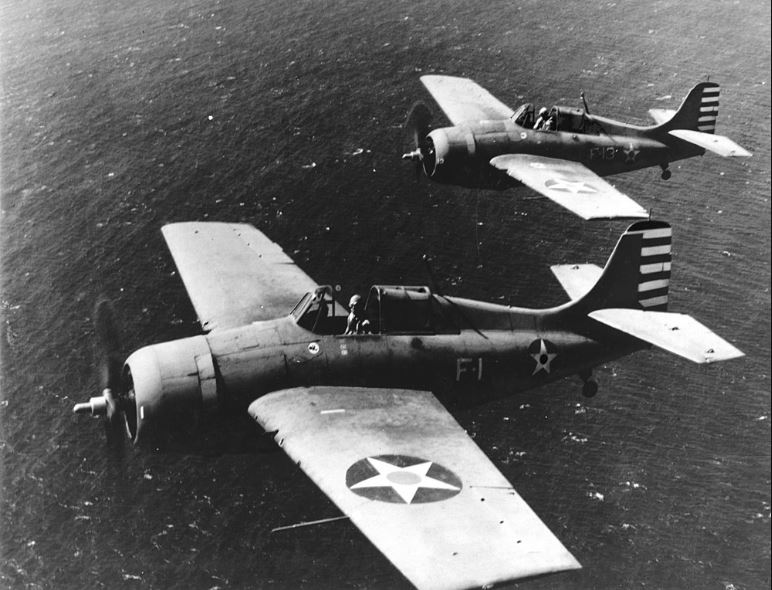 One very critical aspect of task group scheduling, make-up and operations centered on the deployment and control of fighters in defense of the carriers from Japanese attack.

Up to this point the carriers depended chiefly on surprise to compensate for numerical or matériel inferiority, and always desired to strike first. But now, in the face of extensive shore-based air, that could be problematic. Fighters  were necessary to ward off incoming strikes, maintaining  Combat Air Patrol station (CAP) stations along the anticipated strike axis, and over the carriers, plus escort strike groups, and also attack selected land targets or ships.

Admiral Kinkaid judged needed fighter strength according to the anticipated opposition. For “normal operations” the carriers should each have forty F4F Wildcats instead of the current thirty-six, but against tougher defenses there should be sixty. To conduct amphibious offensives, such as Watchtower, where the carriers themselves must support ground operations, one carrier should have one hundred or more fighters.

Increasing fighter strength, however, correspondingly reduced offensive power in the form of dive bombers and torpedo planes.  Fighter escorts remained weak, particularly for the vulnerable torpedo planes. Some leaders, notably Captain Davis, recommended limiting torpedo planes to moonlight strikes and finishing off cripples, or using them as horizontal bombers. Fletcher strongly disagreed. The aerial torpedo was the most powerful antiship weapon in the air arsenal.

The Wildcat was acknowledged as having inferior performance to the A6M Zero but experience provided knowledge and after the Eastern Solomons, the carrier pilots appeared more satisfied with the Grumman F4F Wildcat.

In the hands of an expert pilot with a tactical advantage, the Wildcat could prove a difficult opponent against the formidable Zero.  Commander “Jimmy” Thach had devised and used at Midway a defensive tactic that allowed Wildcat formations to act in a coordinated maneuver to counter an  attack, called the “Thach Weave”.

During the Guadalcanal Campaign the most widely employed tactic  was high-altitude ambush, where a high-side guns pass  was executed using altitude advantage. 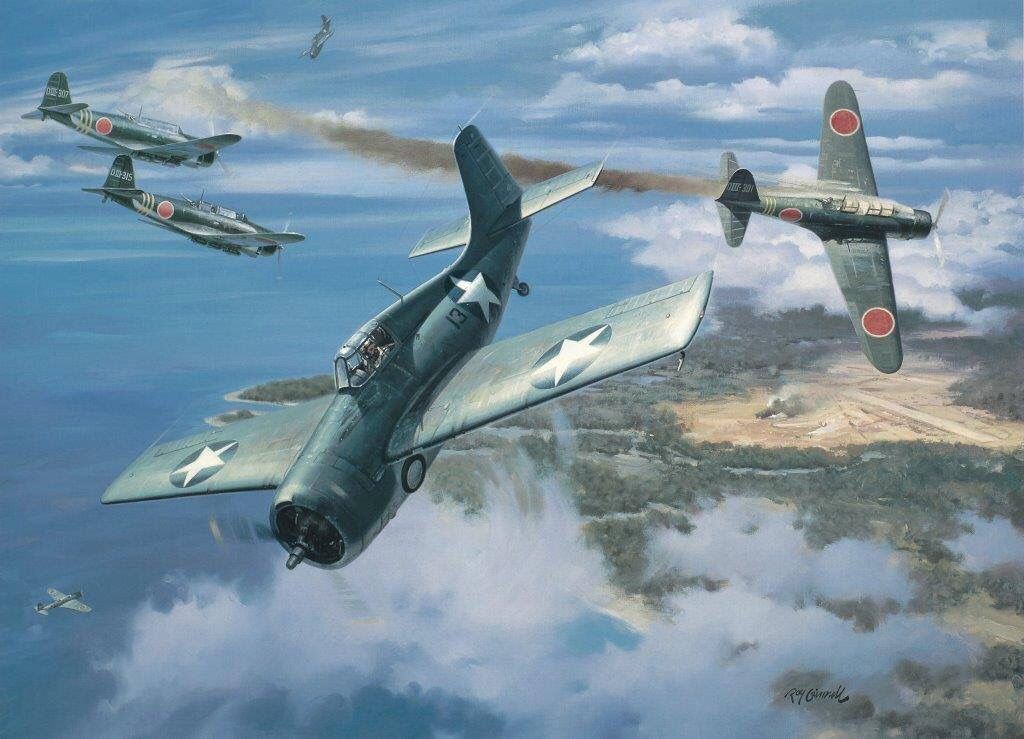 This was possible due to an early warning system composed of Coastwatchers and radar. On the occasions, when Wildcats were unable to gain altitude in time, losses would increase. For example, on 2 October 1942, a Japanese air raid from Rabaul was not detected in time and the Cactus Air Force lost six Wildcats to only one Zero destroyed. During the most intense initial phase of the Guadalcanal Campaign, between 1 August and 15 November, combat records indicate that US lost 115 Wildcats and Japanese lost 106 Zeros to all causes; of significant note though, the Japanese lost many more pilots.

he only immediate action in the absence of better fighters was to have more Wildcats. Also, having a dedicated “fighter carrier,” was discussed. Kinkaid  and Fletcher concurred with the idea if enough other carriers were available to accomplish the offensive mission.

Another critical factor was the positioning and control of the fighters characterized as fighter direction with a Fighter Direction Officer. Selection, training and experience of these billets was initially weak. After the Eastern Solomons Fletcher called fighter direction “not entirely satisfactory although much better than previously experienced.” The intercept of lone shadowers continued to excel, but the carriers still seemed at a loss in concentrating the combat air patrol aircraft to defeat strike groups. Yet ship antiaircraft improved considerably, and the fast battleship had proven invaluable.

CAPT Hardison,  Enterprise commading officer, in his Santa Cruz action report stated, “Fighter Direction having fallen short of expectations in two successive actions, a careful re-examination and analysis of the problem is required.” Re-examination was made at many levels with the following findings (summarized) :

In November 1942 Admiral Nimitz directed that every Pacific Fleet combatant ship was to have a “Combat Operations Center” (COC) with radio equipment on the fighter and warning nets. It was also to have interior communications with the bridge, radar rooms, gunnery stations, and fire control stations. It was to be provided with tactical and strategic information, weather, and navigation data and a means of displaying such information. Subject to the orders of the Officer in Tactical Command, the COC was also to have control of the ship’s radars, and whenever the ship was a Fighter Director or Radar Guard Ship it was to transmit data on air targets in a standard format. Nimitz went on to direct that search radars were to be in operation at all times when there was a possibility of enemy contact.

Then in December the Chief of Naval Operations, Admiral King, issued a Temporary Change to Cruising Instructions for Carrier Task Forces, incorporating fighter direction lessons learned in an expanded annex on Fighter Direction. It started out with the statement, ”Control of combat patrols by the Fighter Direction Officer must be absolute.” It went on to say that, against an incoming raid, the FDO must send out enough fighters to thwart it, and the intercept must be made at the maximum possible distance from task force center. Furthermore, the FDO was to keep reserve CAP over TF center, and that fighters should never chase a retreating raid. If raid altitude was not definitely known, the FDO was to stack his fighters, with most at the higher levels. To pilots, the CNO directed they must tell the FDO his range and bearing from TF center when leaving station on first vector, as well as weather status; and upon tallyho, he must send back raid size, altitude, and aircraft type. Pilots were to repeat back all orders.

These changes along with the task force organization changes discussed in the previous post, a major up-grade in the training of FDO’s, and of course new carriers and new fighters (F6F and F4U) were the foundation of fleet defense as U.S. forces began the march across the Pacific islands in 1944 and 45. And indeed is the forerunner of current Combat Information Centers of today as shown here: 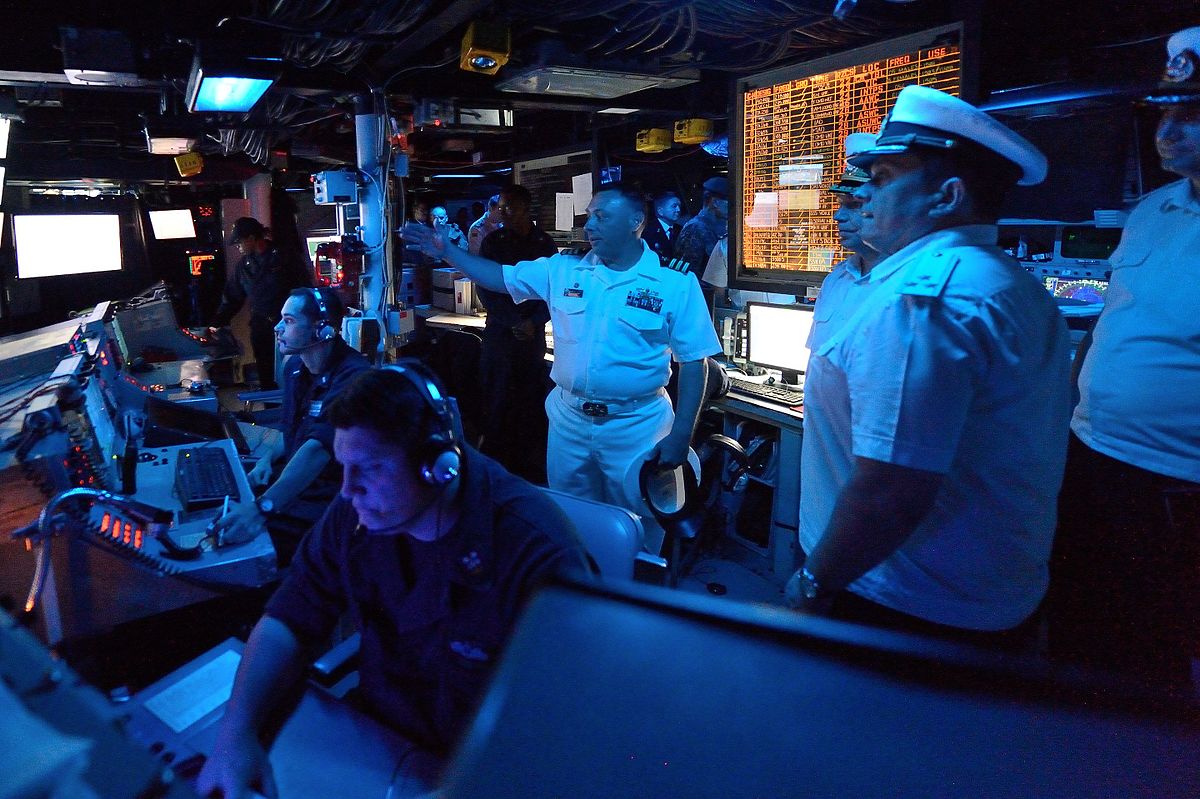