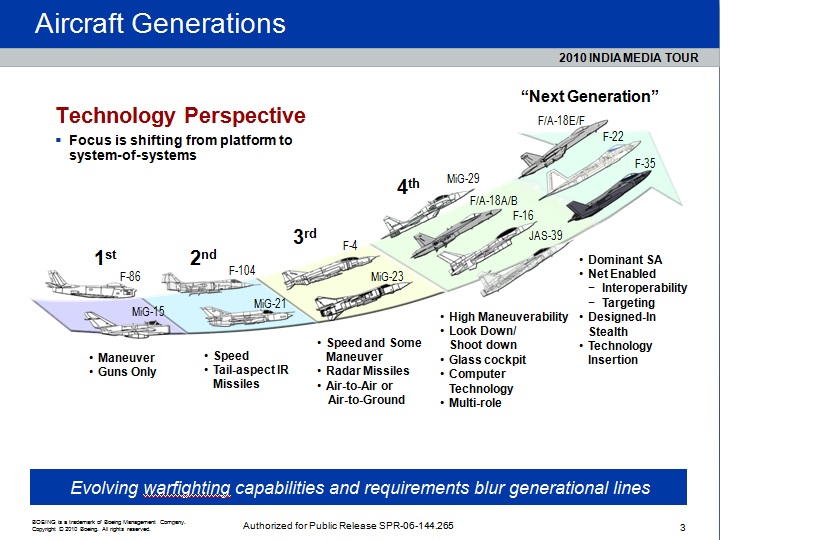 These fighter aircraft were the first military aircraft using jet engines. A few were developed during the closing days of World War II.  The first operational fighters were the 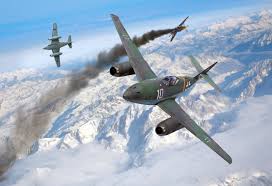 German Messerschmitt Me 262 and the  British Gloster Meteor. But also Russia’s Mikoyan’s design office worked on the twin-engined MiG-9 while Yakovlev’s design office brought out the single-engined Yak-15 in October 1945.  Both promised to be lighter, easier to fly, to have better flying characteristics and be more reliable than the German planes.They  saw very limited combat operations. Also included are early post-War aircraft such as the F-80 and F-84.

First generation fighter aircraft were the first military aircraft using jet engines.  This generation evolved from all early jet fighters and including those used in the Korean War. The early models are similar in construction to their propeller driven WWII 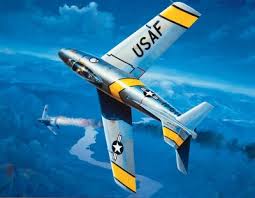 predecessors with 1st and 2nd generation turbojets for power. They had basic avionic systems with no radars or self-protection countermeasures, and were armed with machine guns or cannons, as well as unguided bombs and rockets. A common characteristic of this generation of fighter was that the jet engines did not have afterburners and the aircraft operated in the subsonic regime.

During the Korean War, air combat between jet fighters was mostly represented by MiG 15 and F-86 Sabre engagements using guns. This group included mature fighters such as the F-86 and the later F-100.

Second Generation fighter aircraft exhibited more advanced avionics, engines, and used the first guided air-to-air missiles. The period from 1950 until 1955 is marked by a dearth of significant interceptor prototypes except for the 1953 appearance of the MiG-17. The second generation fighters saw the introduction of air-to-air radar, infrared and semi-active guided missiles, as well as radar warning receivers into such aircraft as the F-104, F-5, MiG-19 and MiG-21. This generation’s fighters also incorporated advances in engine 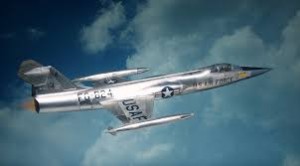 design and aerodynamics, which allowed them to reach and sustain supersonic speeds in level flight. During this period, although air-to-air combat was still within visual range, radar-guided missiles started to extend engagement ranges.

Second-generation aircraft-including the MIG-15 to MIG-19 and U.S. century series fighters that were designed during the 1940s and 1950s. Note that the MiGs were essentially point defense fighters with limited range and little avionics sophistication. Although they are still found in fighter inventories worldwide, older planes probably have limited combat potential when confronting more modern fighters, since they may suffer from several disadvantages. For example, they may carry less sophisticated munitions and have less capable sensors. The early MiG and Su series aircraft have been improved in their air-to-air role. The MiG-23 Flogger B was a second generation fighter which had a secondary ground attack capability greater than the Fishbed or Fitter.

Changes in the fighter combat conception, new air-to-air guided missiles and the results from first and second generation fighter operations gave rise to Third Generation fighter aircraft  This generation witnessed improvements in maneuverability, and significant enhancements to the avionic suites and weapon systems. They were also the first cadre of multi-role fighters such as the MiG-23, F-4, and Mirage III. 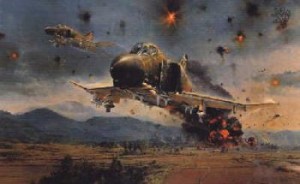 The major change brought about by this generation aircraft was that it was no longer necessary to visually acquire opponents to neutralize them and gain control of the air.   Doppler radar supported a ‘lookdown/shoot-down’ capability, and with off-bore-sight targeting and semi-active guided radio frequency missiles like the AIM-7 Sparrow and AA-7 Apex, aerial engagements moved to beyond visual range.  The archetype of this generation is the McDonnell Douglas F-4 Phantom II -the US jet fighter model with the highest production number to date, along with and Russian aircraft such as the MiG-21 and MiG-23.

Still in use today, third-generation aircraft may provide somewhat improved military capability, especially if they have gone through extensive modifications since they were built. Designed during the 1960’s through 1970’s, this generation includes the MIG-27 series designed by former Soviet Union’s Mikoyan Design Bureau. The third generation fighter-bombers and tactical bombers included the Su-24 and their derivatives, the F-4s and A-7’s built by the United States; and the European designed Mirage 3, Mirage 5, Tornado, and F-l.

Fourth-generation designs are heavily influenced by lessons learned from the previous generation of combat aircraft.  Most of this generation of fighters had the ability to both switch and swing roles between air-to-air and air-to-ground, as opposed to the previous role-dedicated aircraft. This in turn blurred the distinction between control of the air and strike missions. This continues the trend towards multi-role fighters equipped with increasingly sophisticated avionics and weapon systems. These fighters also began emphasizing maneuverability rather than speed to succeed in air-to-air combat. Through the 1970s and 80s the trend of improvement in avionics such as head-up displays and optimized aerodynamic design continued with the development of ‘fly by wire’ fighters such as the MiG-29, Su-27, F-14, F/A-18, F-15, F-16, and Mirage-2000. 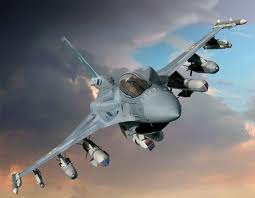 The concept of having a half generation increment stemmed from a forced reduction in military spending, which resulted in a restriction in aircraft development. It became more cost-effective to add ‘stealth’, radar absorbent materials, thrust vector controlled engines, greater weapons carriage capacity and to extend the range of fourth generation fighters, such as the Hornet, Eagle and Flanker, than to design new aircraft. The F/A-18E/F Super 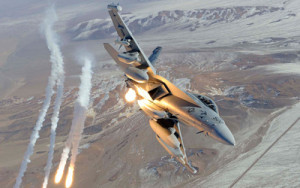 Hornet is an example of a 4.5 generation fighter evolved from a fourth generation aircraft. The addition of an Active Electronically Scanned Array (AESA) radar was a significant enough game-changing combat capability for these redesigned fighters to be deemed a generation of their own, hence the generation 4.5 rating.

Some manufacturers designed new platforms, such as the Eurofighter Typhoon, Saab JAS 39 Gripen and Dassault Rafale, which incorporate many of the generation 4.5 advanced characteristics. Advances in computer technology and data links also allowed 4.5 generation fighters to be integrated into a network centric battlespace where fighter aircraft have much greater scope to conduct multi-role missions. As an example, the AESA radar allows fighter aircraft to perform a limited Airborne Early Warning and Control function.  Overall, good examples are the F/A-18E/F Super Hornet, Eurofighter Typhoon, and Dassault Rafale. All make use of advanced avionics to improve mission capability and limited stealth characteristics to reduce visibility when compared to older fourth generation aircraft

Use of low observable “stealth” technology is the primary consideration for designation as a Fifth generation fighter.   A quantum improvement in the fighter’s lethality and survivability has been a qualifying requirement to achieve generational change and the fifth generation fighters personify these traits. The advances over earlier generational fighters include nose-to-tail low observable or stealth technologies as part of the aircraft’s design that make it almost impossible for even other generation five fighters to detect them; improved situational awareness through having multi-spectral sensors located across all aspects of the airframe which allows the pilot to ‘look’ through the airframe of the aircraft without having to maneuver the fighter to obtain a 360 degree picture which in turn, enhances the aircraft’s ability to use its suite of weapons to engage and neutralize an adversary without the adversary even being aware of the threat.

These aircraft are also ‘born’ networked which allows them to receive, share and store information to enhance the battlespace picture. Fifth generation fighter capabilities are largely defined by their software and it will be the ongoing development of their software that will ensure they maintain their edge against evolving threats. The F-35 has more software than any other air combat aircraft, with 7 million lines of code in the aircraft, and a further 7 million lines of code in the supporting ground systems. An example of the complexity and sophistication of the F-35 software is that it uses about 100 times the number of parameters than a fourth generation fighter does to define a potential threat. Ultimately, a fifth generation aircraft allows the pilot to maintain decision superiority over an adversary. This provides greater chances of survivability, which when combined with effective lethality, assures battlespace dominance. 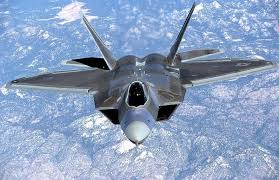 The F-22 Raptor, introduced in 2005, is considered the first next generation fighter aircraft. followed by the  F-35, with Russia following with the Mikoyan Gurevich MFI prototype and the Sukhoi PAK-FA, and China with the J-20.

chines instead of standard leading edge extensions or canards

Note: for the F-35 this is referred to as C4ISR-D, where “D” refers to decision making capability due to the a/c designed-in system capability to fuse all sensor sources, thereby lessening pilot workload and allowing AWACS-like capability in a single seat a/c) 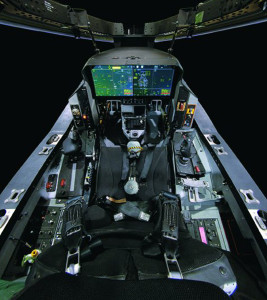 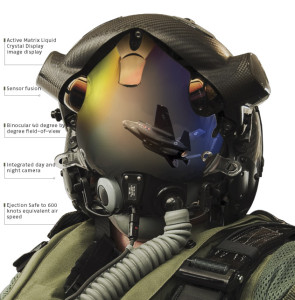 Discussion  Stealth characteristics markedly enhance the capability for survivable attack of defended targets. And that remains true, even though evolving modern air defenses available on the international arms markets have increasing capability against currently deployed levels of stealth. Hence, to continue to operate effectively in the face of these defenses, stealth has to be supplemented with other survivability features. Nonetheless, stealth aircraft operate at much lower levels of support than conventional aircraft and even small numbers of stealth aircraft can greatly leverage the capabilities of the remainder of the bomber force and of the tactical fighter forces.

Europe and Japan are behind in applied stealth technology as evidenced by U.S. aircraft programs such as the F-22, B-2, and F-117A. Most of the applied foreign low-observable work involves basic shaping, material coating techniques, and signature testing requirements. Europe has been led by France, Sweden, Germany, and the United Kingdom in various types and levels of low-observable applications. Applications on fighter aircraft have generally been at fundamental applied levels, primarily using absorbent coatings, limited structural shaping, and absorbent structure. Applications seem to be limited to the areas with highest signature return rather than application to an entire airframe. European firms are also working on stealth technology applications to cruise missiles and unmanned aerodynamic vehicles.

The rapid growth of a globalized economy has deepened the degree of international cooperation and expanded the variety of methods of cooperation in the international arms production industry to such an extent that a globalization trend has also emerged in this field. At present, there are mainly three ways in which globalization exhibits itself. The first is through the purchasing of weapons from other countries and taking part in the production of these weapons (including granting of special permits, joint cooperation and development ventures, and compensation trade). An example is the joint production of F-16 fighter jets by the United States, Holland, Denmark and Norway. The second method is through military cooperation packages covering weapons trade, production and maintenance, and joint military exercises between different countries, e.g. the signing of the ten-year military cooperation agreement package between India and Russia in 1999. The final means is through cross- border joint ventures, and joint research and development projects between nations (including international group companies, international integration and transnational amalgamation). The four-nation joint venture for the production of “Eurofighter-2000” by Britain, Germany, Italy and Spain is an example.

A sixth generation jet fighter is a conceptual aircraft expected to enter service in the United States Air Force and Navy in 2025–30 time frame. 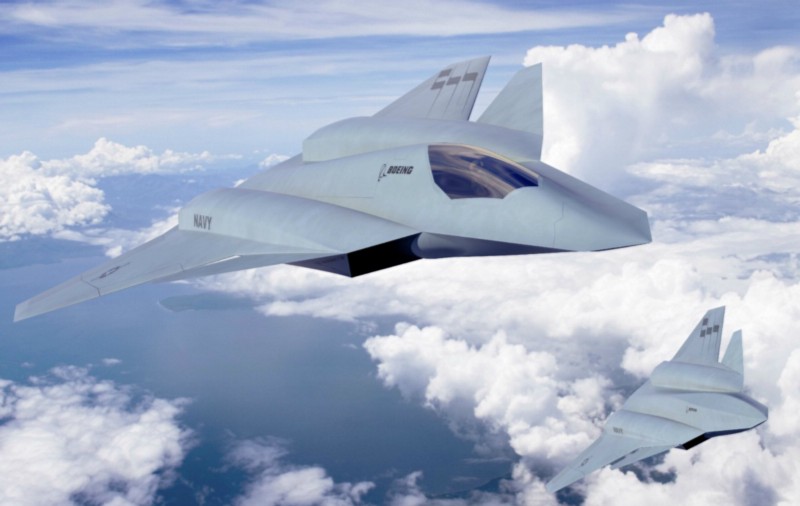