“Here I’m responsible for the lives of my gang. In civilian life, I’m the kind of guy you wouldn’t like to meet on a dark street.”  Flight Deck petty officer

Our team noted with some surprise the adaptability and flexibility of what is, after all, a military organization in the day-to-day performance of its tasks. On paper, the ship is formally organized in a steep hierarchy by rank with clear chains of command, and means to enforce authority far beyond those of any civilian organization. We supposed it to be run by the book, with a constant series of formal orders, salutes, and yes-sirs. Often it is, but flight operations are not conducted that way. 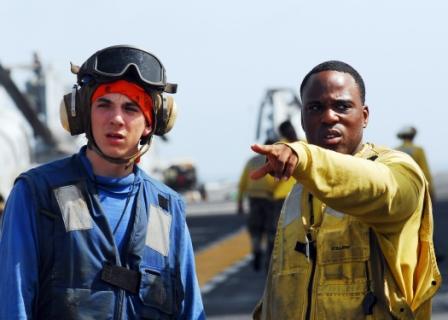 Flight operations and planning are usually conducted as if the organization were relatively “flat” and collegial. This contributes greatly to the ability to seek the proper, immediate balance between the drive for safety and reliability and that for combat effectiveness. Events on the flight deck, for example, can happen too quickly to allow for appeals through a chain of command. Even the lowest rating on the deck has not only the authority but the obligation to suspend flight operations immediately, under the proper circumstances, without first clearing it with superiors. Although his judgment may later be reviewed or even criticized, he will not be penalized for being wrong and will often be publicly congratulated if he is right.

Coordinated planning for the next day’s air operations requires a series of involved trade-offs between mission requirements and the demands of training, flight time, maintenance, ordnance, and aircraft handling. It is largely done by a process of ongoing and continuing argument and negotiation among personnel from many units, in person and via phone, which tend to be resolved by direct order only when the rare impasse develops that requires an appeal to higher authority. In each negotiation, most officers play a dual role, resisting excessive demands from others that would compromise the safety or future performance of their units, while maximizing demands on others for operational and logistic support.

This does not mean that formal rank and hierarchy are unimportant. In fact, they are the lubricant that makes the informal processes work. Unlike the situation in most civilian organizations, relative ranking in the hierarchy is largely stable and shaped by regular expectations, formal rules, and procedures. … the shipboard situation tends to promote cooperative behavior, which tends to minimize the negative effects of jealousy and direct competition. .. we rarely observe such strategies as the hoarding of information or deliberate undermining of the ability of others to perform their jobs that characterize so many civilian organizations, particularly in the public sector.

“How does it work? On paper, it can’t, and it don’t. So you try it. After a while, you figure out how to do it right and keep doing it that way. Then we just get out there and train the guys to make it work. The ones that get it we make POs. ‡ The rest just slog through their time.”  Flight deck CPO

Operational redundancy—the ability to provide for the execution of a task if the primary unit fails or falters—is necessary for high-reliability organizations to manage activities that are sufficiently dangerous to cause serious consequences in the event of operational failures.  In classic organizational theory, redundancy is provided by some combination of duplication (two units performing the same function) and overlap (two units with functional areas in common). Its enemies are mechanistic management models that seek to eliminate these valuable modes in the name of “efficiency.”  For a carrier at sea, several kinds of redundancy are necessary, even for normal peacetime operations, each of which creates its own kinds of stress.

A primary form is technical redundancy involving operations-critical units or components on board—computers, radar antennas, etc. In any fighting ship, as much redundancy is built in as is practicable. This kind of redundancy is traditional and well understood. Another form is supply redundancy. …Here is a clear case of a trade-off between operational and safety reliability that must be made much closer to the edge of the envelope than would be the case for other kinds of organizations. Indeed, for a combat organization, the trade-off point is generally taken as a measure of overall competence.

Most interesting to our research is a third form, decision/management redundancy, which 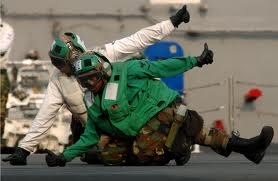 encompasses a number of organizational strategies to ensure that critical decisions are timely and correct. This has two primary aspects: (a) internal cross-checks on decisions, even at the micro level; and, (b) fail-safe redundancy in case one management unit should fail or be put out of operation. It is in this area that the rather unique Navy way of doing things is the most interesting, theoretically as well as practically.

As an example of (a), almost everyone involved in bringing the aircraft [in for a landing] on board is part of a constant loop of conversation and verification taking place over several different channels at once. …. This constant flow of information about each safety-critical activity, monitored by many different listeners on several different communications nets, is designed specifically to assure that any critical element that is out of place will be discovered or noticed by someone before it causes problems….

Fail-safe redundancy, (b), is achieved in a number of ways. Duplication and overlap, the most familiar modes of error detection, are used to some extent—for example, in checking mission weapons loading. Nevertheless, there are limits to how they can be provided. Space and billets are tight at sea, even on a nuclear-powered carrier, and unlike land-based organizations, the seagoing Navy cannot simply add extra departments and ratings. Shipboard constraints and demands require a considerable amount of redundancy at relatively small cost in personnel. In addition to the classic “enlightened waste” approach of tolerance for considerable duplication and overlap, other, more efficient strategies that use existing units with other primary tasks as backups are required, such as “stressing the survivor” and mobilizing organizational “reserves.”

Stressing-the-survivor strategies require that each of the units normally operate below capacity so that if one fails or is unavailable, its tasks can be shifted to others without severely overloading them. Redundancy on the bridge is a good example. 34 Mobilizing reserves entails the creation of a “shadow” unit able to pick up the task if necessary. … Most of the officers and a fair proportion of senior enlisted men are familiar with several tasks other than the ones they normally perform and could execute them in an emergency.

The Combat Direction Center (CDC, or just “Combat”), for example, is the center for fighting the ship.  Crucial decisions are thereby placed nominally in the hands of relatively junior officers in a single, comparatively vulnerable location. In this case we have noted several of the mechanisms described above. There is a considerable amount of senior oversight, even in calm periods. A number of people are “just watching,” keeping track of each other’s jobs or monitoring the situation from other locations. There is no one place on the ship that duplicates the organizational function of Combat, yet each of the tasks has a backup somewhere—on the carrier or distributed among other elements of the battle group. 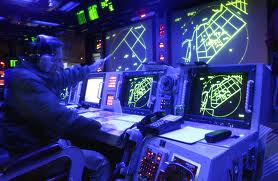 In an “ordinary” organization these parameters would likely be characterized in negative terms. Backup systems differ in pattern and structure from primary ones. Those with task responsibility are constantly under the critical eyes of others. Authority and responsibilities are distributed in different patterns and may shift in contingencies. In naval circumstances, where reliability is paramount, these are seen as positive and cooperative, for it is the task that is of primary importance.

Thus, those elements of Navy “culture” that have the greatest potential for creating confusion and uncertainty turn out to be major contributors to organizational reliability and robustness under stress. We believe this to be an example of adaptive organizational evolution to circumstance, for it responds very well to the functional necessities of modern operations.

“The job of this ship is to shoot the airplanes off the pointy end and catch them back on the blunt end. The rest is detail.” Carrier Commanding Officer 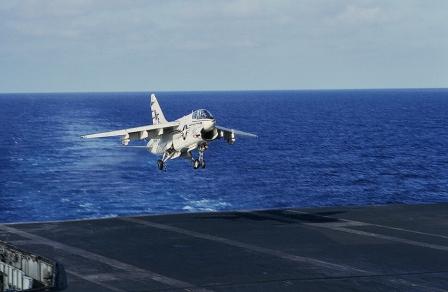 Even though our research is far from complete, particularly with regard to comparisons with other organizations, several interesting observations and lessons have already been recorded.

First, the remarkable degree of personal and organizational flexibility we have observed is essential for performing operational tasks that continue to increase in complexity as technology advances. “Ordinary” organizational theory would characterize aircraft carrier operations as confusing and inefficient, especially for an organization with a strong and steep formal management hierarchy (i.e., any “quasi-military” organization). However, the resulting redundancy and flexibility are, in fact, remarkably efficient in terms of making the best use of space-limited personnel.

Second, an effective fighting carrier is not a passive weapon that can be kept on a shelf until it is needed. She is a living unit possessed of dynamic processes of self-replication and self-reconstruction that can only be nurtured by retaining experienced personnel, particularly among the chiefs, and by giving her sufficient operational time at sea. This implies a certain minimum budgetary cost for maintaining a first-line carrier force at the levels of operational capability and safety demanded of the U.S. Navy.

Third, as long-term students of organizations, we are astounded at how little of the existing literature is applicable to the study of ships at sea. Consider, for example, the way in which the several units that make up a battle group (carrier, air wing, supply ships, escorts) are in a continual process of formation and reformation.

Imagine any other organization performing effectively when it is periodically separated from and then rejoins the unit that performs its central technical function.  More importantly, most of the existing literature was developed for failure-tolerant, civilian organizations with definite and measurable outputs. The complementary body on public organizations assumes not only a tolerance for failure, but at best an ambiguous definition of what measures failure (or for that matter, success). 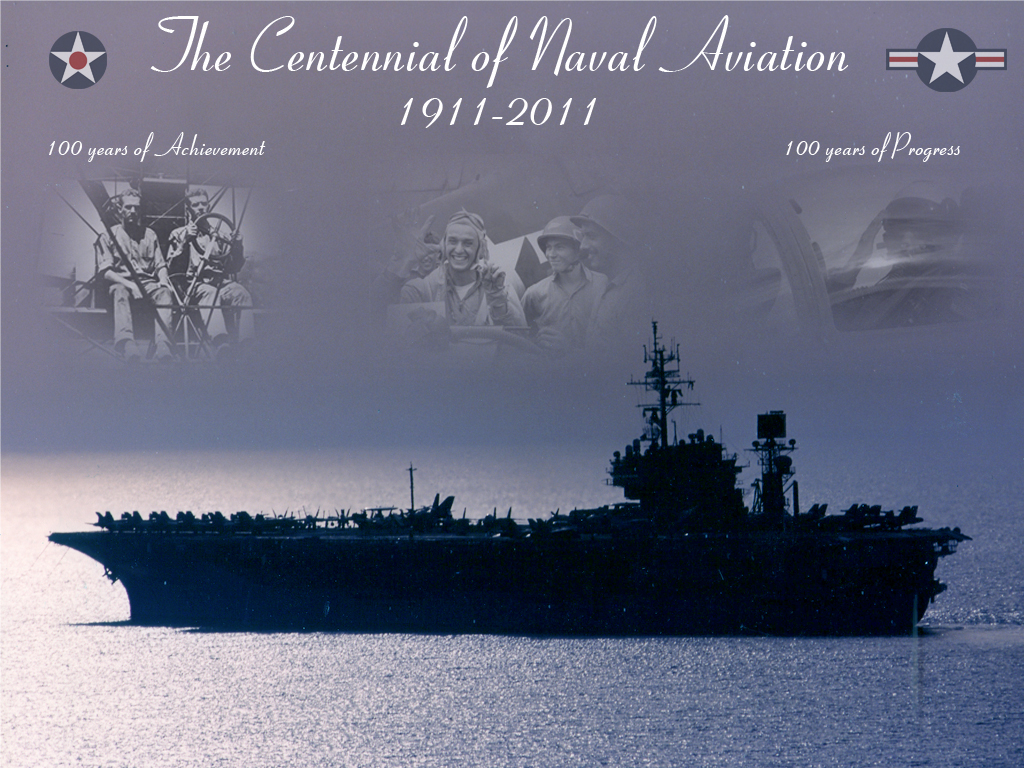