The website: Remembered Sky began so as to tell the ’72-’73 story of USS Midway, Carrier Airwing Five and to further focus primarily on the Attack mission side. It emerged out of revisiting  and reflecting on my career as a Naval Aviator in light of the 100th year anniversary of Naval Aviation in addition to a re-sparking of a long term frustration with, and almost impossibility of finding anything on the carrier and airwing that set the record in the Vietnam War for days on the line, and one of only four to receive the Presidential Unit Citation – equivalent of Navy Cross at the unit level – USS Midway and CAG Five.

While the initial writing was mostly about the VA-56 Champs and A-7s, after meeting up with old friend Dave Kelly from A-6 VA-115, who had the same frustrations/misgivings on USS Midway and attack side stories, we jointly took on “attack” story telling.  Snako is considered a co-author for Remembered Sky. Dave passed away in March 2014  but before he did, he got his book Not On My Watch published.

Editor and author: During his Navy career (May 1968- July 1988) Ed ‘Boris’ Beakley was qualified in both fighter and attack aircraft with 170 combat missions in Southeast Asia including 100+ over North Vietnam in Attack Squadron 56 (VA-56).  As a test pilot, he had flight-test experience in all USN Attack/Strike aircraft and was the Program Manager/Test Director 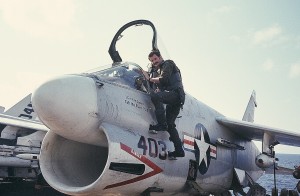 He worked directly in concept development for adapting and changing test and evaluation and range capabilities to meet the operational need for integrating cruise weapons with Tactical Aircraft (TACAIR) operations. This effort eventually grew to involve Commander THIRDFLEET and the Navy Strike and Air Warfare Center at Fallon Nevada.  This required capability to support joint testing and training, and the adaptation of the testing and training events to create more operationally realistic events This concept included incorporating C4I aspects into weapons test events, embedding battle management scenarios into live operations by use of distributed simulation technology, and networking of multiple ranges to create multi-service capability.

He is a member of the A-7 Corsair II Association, Red River Valley Fighter Pilots

Association and Society of Experimental Test Pilots. In addition to Remembered Sky, he publishes a website and blog on decision making in severe crisis, Project White Horse 084640