The story of how the Marines developed a close air support system needs to be told. It is a story that is distinct from the volumes of literature written about 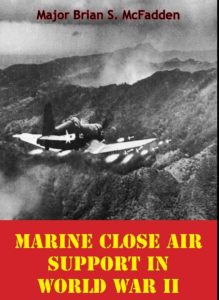 the controversial strategic bombing campaign or the more glamorous air-to-air battles that raged in the skies of Europe and the Pacific. It tells of the commitment to support the ultimate instrument of National policy: a soldier or Marine on the ground. The story of Marine CAS is important because it shows how a force, while constrained by lack of money and hindered by administrative opposition, became a more effective fighting organization. Marine CAS development is a pertinent subject for the study of modem day air and ground operations for the same reasons.

Getting started – in a war

Guadalcanal allowed Marine pilots to provide the first Marine CAS in the Pacific. Theater, with the Dauntless SBD dive bombers and the Army Air Corps P-400  flying many of the missions.

Close air support missions are defined by ground and air coordinated attack to further/aid ground forces in contact with an opposing force. The concept of employing CAS was not written into Marine doctrine until July 1935 when the Marine Schools in Quantico drafted the first amphibious landing doctrine, titled the Tentative Landing Operations Manual. This attempt to standardize the combined use of forces during an amphibious assault assigned naval aircraft the missions of air superiority followed by support to the ground forces. Marine aircraft would be used to augment the Navy. Then as airfields became available on shore, Marines would begin to operate their aircraft from land.

The use of aircraft in the air superiority role over the landing force was clearly the priority, and the manual did not identify the means  to command and control the aircraft in response to a request for support from the landing force commander. But as the Guadalcanal Campaign began, CAS was a still a new animal and communications equipment or doctrine were completely non-supportive.

In addition, the Marines and Navy had no suitable CAS aircraft for  supporting an amphibious assault nor the ensuing land operation on Guadalcanal. The aircraft available for CAS missions were the Grumman F4F Wildcat, the Douglas SBD Dauntless dive-bomber, and the Army P-400 Airacobra, an export version of the outdated P-39. As CAS aircraft, these ships were very limited. The F4F was designed as an air-to-air fighter equipped with six .50 caliber machine guns and no provisions for bombs or rockets had been designed for it at this point in the war. The P-400 had also been designed as an air-to-air fighter, but because of engine design it had  e very poor performance at altitude, and was thus not suitable to combat the Zero, and  was assigned low-level attack missions. Its complement of .50 and .30 caliber machine guns, along with a 20- millimetre cannon firing through the propeller hub, made it somewhat more suited for the CAS missions than the F4F.

The only aircraft able to deliver bombs was the SBD Dauntless dive bombers but slow speed made it a much easier target for ground gunners and defending fighters to destroy. However, it did have two forward firing machine guns useful for strafing and two swivel-mounted .30 caliber guns in the aft cockpit for the radio operator to fend off attackers from the rear.

Ground requests for ground support went directly to the Division located at Henderson Field, which processed them and passed the information along to the aircrews. The pilots briefed the target specifics before takeoff, and they often walked up to the front lines themselves to observe the next target before a mission.

The five-month battle for Guadalcanal offered few opportunities for aviation missions in direct support of the ground fighting. As long as the battle hung in the balance, Marine fighters and dive-bombers were urgently needed to interdict Japanese air raids and reinforcement convoys steaming down “the Slot” from Rabaul.

But two particular CAS missions are worth noting:

1) The Marines had held Guadalcanal for thirteen days with only sporadic fighting, but knew that a major counter attack was imminent. That attack came at 0240 on the morning of 21 August when a force of over 900 Japanese soldiers crossed the Tenaru River from the east and slammed into the eastern perimeter guarded by 2nd Battalion, 1 st Marines whose defensive positions were only three thousand yards from the airfield.  The attack was turned back   maintaining the defensive  perimeter intact but At daybreak, the Japanese force attempted to outflank the defending Americans by boarding assault boats and moving out to sea just beyond the breakers, landing again a few hundred yards west of the defense.

Later that the morning, 1 st Division headquarters directed Captain John L. Smith, commander of VMF-223 to provide CAS to 2/1 along the shoreline adjacent to the river. Smith directed Captain Loren D. Everton and three others  to “go out and investigate. The Wildcats located the Japanese still in their boats approaching the shore and  made short work of the fragile boats, spoiling the Japanese counter move. What Everton’s flight did not destroy in the sea was annihilated by 2/1 when it reached the beach. The Japanese attack was halted and the remaining soldiers quickly withdrew into the jungle to the east.

This mission showed several weaknesses in CAS procedures. First, there was no formal way to contact and brief the aircrew prior to launch. The squadron commander was able to quickly pass the mission and the sketchy details to the flight leader because of the close proximity of all the concerned headquarters. Second, no direct means of communication could be established between Everton’s flight and 2/1 due to a lack of doctrine that emphasized air-ground liaison along with proper radios. If  the situation on the ground had changed the flight had no way to adjust. But fortunately given that the  battle took place only a few seconds’ flight from the airfield, there was little time for the situation to change.

2) The next crucial CAS mission on Guadalcanal occurred on 14 September during the defense of Bloody Ridge. As the battle for Guadalcanal continued, USMC and AAF aircraft losses mounted to the point that, on 10 September, only eleven F4Fs, twenty-two SBD dive-bombers, and three P-400s were available,’ and the battle on the ground was getting just as critical as the battle in the air.

Only two thousand yards to the south of Henderson Field lay Bloody Ridge where Lieutenant Colonel Merritt A. Edson’s 1st Raider Battalion had established a last line of defense against an expected Japanese attack out of the jungles to the south. A Japanese brigade over 2,000 strong was preparing to attack on the night of 13 September. If the Japanese could break the thin Marine line, the airfield would be theirs for the taking. The attackers mounted two major assaults before midnight, but Edson’s Battalion bent but did not break, falling back a few yards at a time into successive positions along the ridge toward the airfield.

Before sunup on 14 September, an officer from the 1st Raider Battalion met with the commander of the 67th Fighter Squadron, Captain John A. Thompson. Using a crude map, the Marine described the precarious situation to Thompson and requested a CAS mission at first light. Thompson agreed and as dawn began to break over the island, Thompson’s flight of three P-400s  departed. Bloody Ridge was located almost within the airfield traffic pattern and he could keep  the Marine position in view as his flight  began a slight turn to the south.

Flying at tree top level, Thompson led the flight below the level of Bloody Ridge and pointed at the suspected Japanese assembly area. When the area came into view, Thompson could see large groups of Japanese soldiers massing for an attack and immediately began to fire. 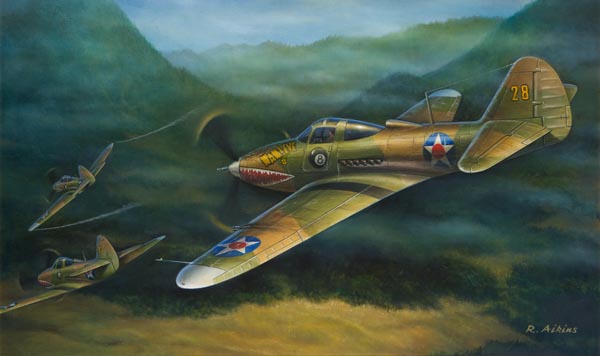 The Japanese attack was repulsed by the iron defense of the 1 st Raider Battalion with Thompson’s P-400 CAS mission throwing the final weight that broke the Japanese assault. Later that afternoon, Vandegrift visited Thompson, Davis, and Brown saying, “You’ll never read it in the papers, but that three P-400 mission of yours saved Guadalcanal.”

As with Everton’s CAS mission on 21 August, the CAS mission by the 67th FS was successful despite a lack of better coordination. Had the units been further away from the airfield, the situation might have differed from what was briefed to Thompson that morning. Only a dedicated liaison team and direct ground-to-air communications would be able to redirect a CAS mission based on changes in the tactical situation.

In evaluating the state of Marine CAS after the Guadalcanal land battles, it is safe to say that the equipment, organization, and doctrine did not meet the highest standards of combat efficiency.

Major General Vandegrift recognized that the commander of the landing force must have command of the air support assets if he is to derive their full effect. Over the course of the campaign, the tactics employed were simple and effective because of the very close distance between the airfield and the battlefield. This reduced the time the tactical situation could change, reducing the need for air-ground liaison and direct communications. However, he foresaw the need for these capabilities in future battles where ground commanders would not have those same short CAS response times that he enjoyed on Guadalcanal.  From this point forward, the Marines fought to employ all their assets in an air-ground task force that included close air support.

In his action report to the Navy Department  General Vandegrift captured the lessons learned from the battle for Guadalcanal, identified  crucial weaknesses in the use of CAS, and provided several recommendations to correct these faults. Most were implemented prior to operations in the Gilbert Islands:

Guadalcanal CAS was rudimentary compared to that of 1944-45 operations, but lessons learned led to significant developments in the air/ground relationship and the evolution would start to take effect at New Georgia in 1943.

By April of 1945, the Marines had developed their CAS system into an effective and flexible tactical weapon. Their doctrine, tactics, aircraft, weapons, and liaison organizations all had advanced from the prewar makeshift approach of 1940 to an efficient and well-trained force able to mass large amounts of lethal close air support at the critical point on the battlefield. The Marine commitment to fighting as a combined-arms organization was probably the single driving factor that brought these changes about. Their initiative to develop CAS and integrate it into ground operations provided a great deal of added firepower to a ground commander’s arsenal….

After the battles on Guadalcanal and Tarawa where the deficiencies in CAS became painfully evident, the Navy began to place more emphasis on assisting the Marine CAS effort. This shift in doctrine resulted in the eventual assignment of Marine Carrier Air Groups (MCVGs) onto the small escort aircraft carriers (CVEs) for the express purpose of providing CAS for an amphibious assault.

(But) The CAS provided by the Navy at Tarawa stands out as an example of poorly trained aircrews and badly coordinated use of CAS resulting from a distinct lack of emphasis. After much wrangling and administrative maneuvering, the Marines’ aspirations were realized. … Plans for the invasion of the Japanese home islands (named Operation OLYMPIC) called for no less than eight MCVGs to support the assault.

In viewing these lessons in light of current or future combat operations, only a similarly integrated and coordinated CAS system is sure to give maneuver commanders the flexible and responsive air support they need. Any aviation asset used in a segregated, piecemeal manner that relies on time schedules rather than close integration with forces on the ground is doomed to fail as a CAS weapon.

If fighting as a combined arms “team of teams” is the goal of current tactical doctrine, then the development of Corsair and Thunderbolt aircraft, and the lessons learned by the USMC and eventually by the Navy and Army Air Corps in World War II serve as excellent touchstones for future training.