We begin Chapter 3 of testimony with the source of THE question from James Michener.  I remember my parents taking me to see the movie when it first came out. I’ve watched it multiple times since and done some research on the original Korean War context. Can’t say I was ever in favor of the ending but both the book and movie were a significant factor in my early interest in flying and eventual desire for  and then pursuit of wings of gold. It represents pretty well the way navy combat flying is in reality.

THE BRIDGES AT TOKO-RI

by James a Michener

Now the sky was empty and the helicopter stood burned out in the rice field and in the ditch there was no one beside him. Harry Brubaker, a twenty-nine-year-old lawyer from Denver, Colorado, was alone in a spot he had never intended to defend in a war he had not understood. 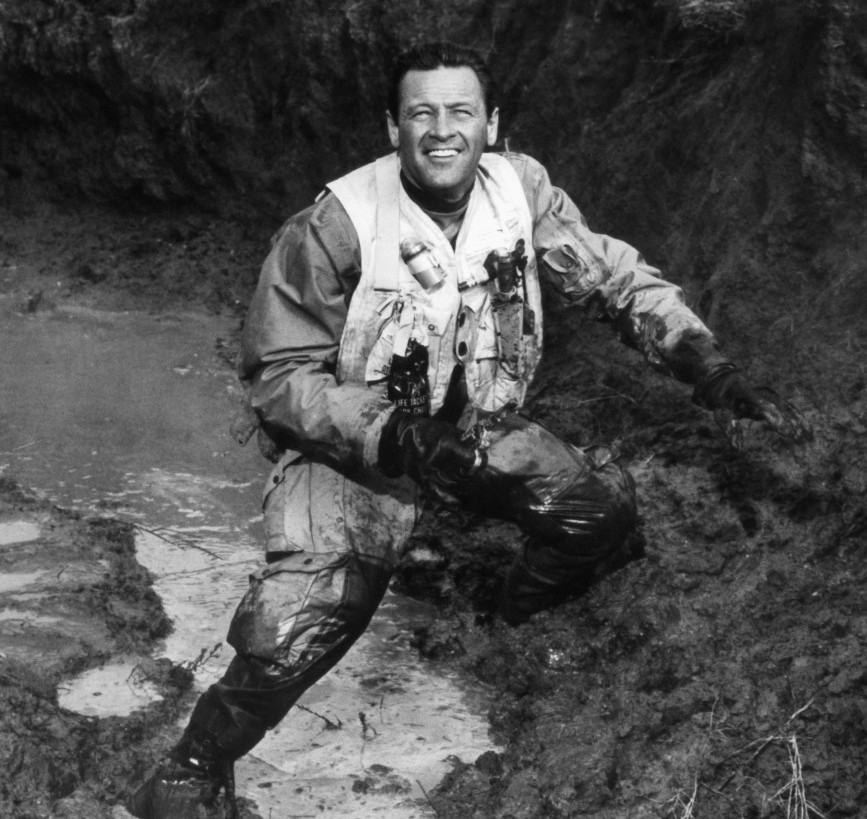 In his home town at that moment the University of Colorado was playing Denver in their traditional basketball game. The stands were crowded with more than 8,000 people and not one of them gave a damn about Korea.

In San Francisco a group of men were finishing dinner and because the Korean war was a vulnerable topic, they laid plans to lambaste it from one end of the country to the other, but none of them really cared about the war or sought to comprehend it.

And in New York thousands of Americans were crowding night clubs where the food was good and the wine expensive, but hardly anywhere in the city except in a few homes whose men were overseas was there even an echo of Korea.

But Harry Brubaker was in Korea, armed with two carbines. He was no longer afraid nor was he resentful. This was the war he had been handed by his nation and in the noonday sun he had only one thought: he was desperately in love with his wife and kids and he wanted to see them one more time…

Through the long afternoon that followed, Admiral Tarrant haunted his telephone, waiting word of the miracle that would save his son…

Shaken, the lean hard-bitten admiral left flag plot and walked gravely to his tiny room. for he knew that he must report these facts to Nancy Brubaker, in Yokosuka… The job was too much for him…

… then he thought of the Cag who had led this ill-starred mission. He burned with fury and summoned the Cag to him, 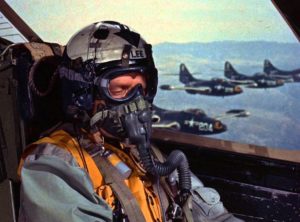 lashing out at the bullet-headed commander as soon as he appeared.

“Why was Brubaker abandoned?” …

“How was Brubaker hit in the first place?”

“He was working over the dumps.”

“The admiral pounced on this.  “What was he doing at the dumps?”

Patiently Cag explained.  “Before we took off we agreed.  If we get the bridges, we expend our ammo on the dumps.”

Icily from the empty bitterness of his bosom, the old man asked,  “Was that wise?”

Cag had had enough.  He’d stood this angry old tyrant long enough and there was no promotion in the navy that would make him take any more. “Admiral,” he said grimly,  ” this was a good mission.  We did everything just right.  I put Brubaker in charge of the third division because I could trust him to fly low and bore in with his bombs.  He did just that.”

Cag, trembling with anger, rushed on,  “Admiral,  everybody in the air group knows that you selected Brubaker as your special charge.  You do that on every command and we know why you do it.  Some kid your on boy’s age.  So today I led your boy to death.  But it was a good mission.  We did everything just right.  And it was your boy who helped destroy the bridges.  Admiral, if my eyes are red it’s for that kid.  Because he was mine too.  And I lost him.”

The old man stood there,  staring stonily at the shaking commander with the bullet head while Cag shot the works.  “I don’t care any longer what kind of fitness report you turn in on me because this was a good mission.  It was a good mission.”  Without saluting he stormed from flag country, his fiery steps echoing as he stamped away.

For many hours the admiral remained alone.  Then toward morning he heard the anti-submarine patrol go out 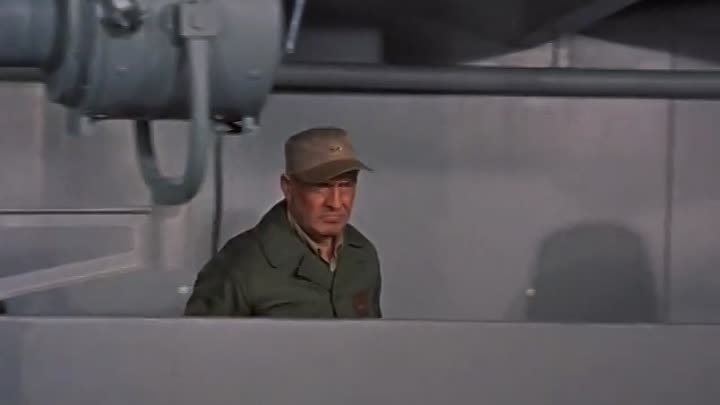 and as the engines roared he asked, “Why is America lucky enough to have such men?  They leave this tiny ship and fly against the enemy.  Then they must seek the ship, lost somewhere on the sea.  And when they find it, they have to land upon its pitching deck.  Where did we get such men?”

He went out to watch the launching of the dawn strike.  As streaks of light appeared in the east,  pilots came on deck…..Majestically, the task force turned into the wind,  the bull horn jangled and a voice in the gloom cried,  “Launch jets.” 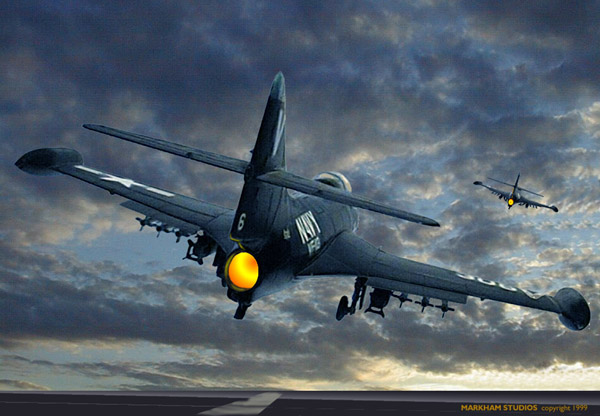 Admiral Tarrant watched them go,  two by two from the lashing catapult, planes of immortal beauty whipping into the air with flame and fury upon them.  They did not waste fuel orbiting but screamed to the west, seeking new bridges in Korea.

The Bridges at Toko-Ri is a 1954 American film about the Korean War. The screenplay is based on the novel by the same name by Pulitzer Prize winner James Michener. It stars  William Holden, Grace Kelly, Fredric March, and Mickey Rooney.

Michener based his novel on actual missions flown against the railroad bridges at Majon-ni and Samdong-ni, North Korea, during the winter of 1951–52, when he was a news correspondent aboard the aircraft carriers USS Essex and USS Oriskany.  Michener based the character of Harry Brubaker on Lieutenant Donald S. Brubaker, who like his counterpart, was a 29-year-old Naval Reservist from Denver recalled to active duty aboard USS Valley Forge. The basis for Admiral Tarrant was Rear Admiral John Perry, the carrier division commander at the time; that of Cag Lee was Commander Marshall U. Beebe, the airwing commander (Cag or CAG) aboard  the Essex in 1951. Beebe was a WWII double ace and was the technical adviser for the film.

Michener had dedicated his book to Beebe, as the Commander of Airwing Five  which included Neil Armstrong’s F9F -2 Panther squadron VF-51 . Armstrong  recounts. “I thought The Bridges at Toko-Ri was an excellent representation of the kinds of flying that we were doing there. It was identical, same kind of aircraft and the same class carrier.”

In the book the attacks against the bridges were by McDonnell F2H Banshee fighter-bombers but were represented by Grumman F9F2 Panthers in the movie. In the historical missions A-1 Skyraiders conducted the bridge  bombings and  Banshees and Panthers  carried out the perilous mission of suppressing enemy anti-aircraft fire. 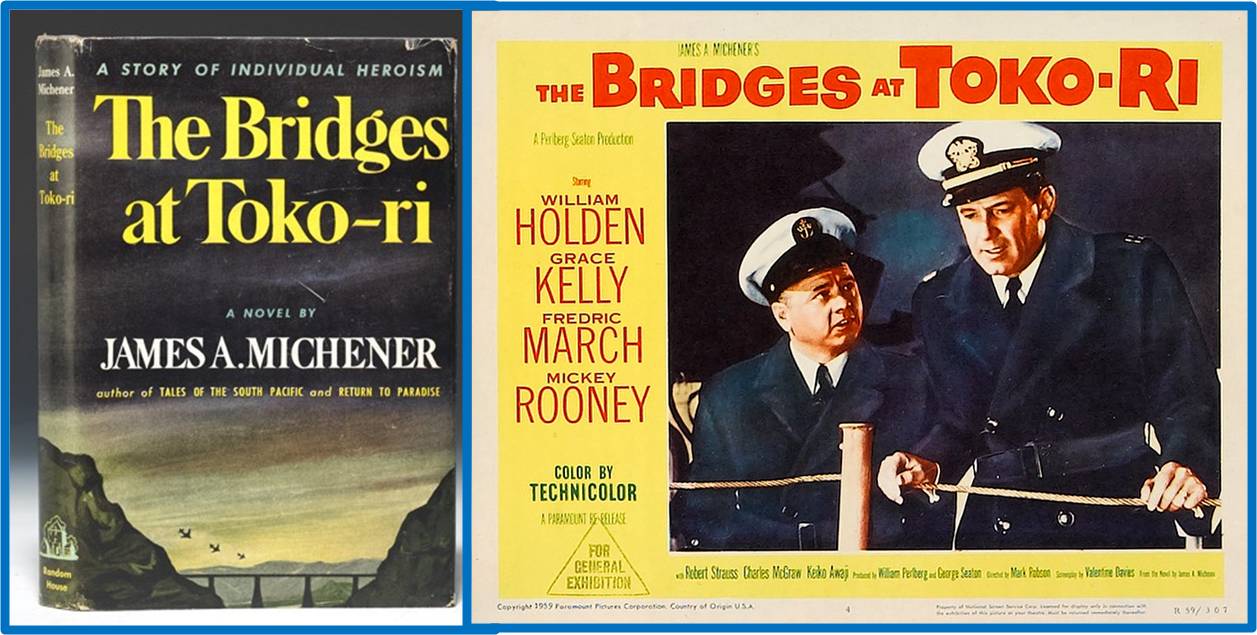 This entry was posted in Testimony of Pilot -Series and tagged Aircraft Carriers, Bridges at Toko-Ri, Korean War. Bookmark the permalink.