1942- The Year of the Aircraft Carrier; Part 17 – Guadalcanal -Battle of the Eastern Solomons Continued (2/3)

To say the least we were in a bad predicament. All of our attack planes were committed on missions with the main enemy force still unlocated and his planes coming in to attack us. The best we could do was to get ready for an air attack and hope for the best.   Captain Davis,  Enterprise

Afternoon of the 24th continued

At 16:02, still waiting for a definitive report on the location of the Japanese fleet carriers, the U.S. carriers’ radar detected the first incoming wave of Japanese strike aircraft. Fifty – three F4F-4 Wildcat fighters from the two U.S. carriers were directed by radar control towards the attackers. However, communication problems, limitations of the aircraft identification capabilities of the radar, primitive control procedures, and effective screening of the Japanese dive bombers by their escorting Zeros, prevented all but a few of the U.S. fighters from engaging the Vals before they began their attacks on the U.S. carriers.

Just before the Japanese dive bombers began their attacks, Enterprise and Saratoga cleared their decks for the impending action by launching the aircraft that they had been holding ready in case the Japanese fleet carriers were sighted. These aircraft were told to fly north and attack anything they could find, or else to circle outside the battle zone, until it was safe to return.

At 16:29, the Japanese dive bombers began their attacks. Although several attempted to set up to attack the Saratoga, they quickly shifted back to the nearer carrier, Enterprise. Thus, Enterprise was the target of almost the entire Japanese air attack. Several Wildcats followed the Vals into their attack dives, despite the intense anti-aircraft artillery fire from Enterprise and her screening warships, in a desperate attempt to disrupt their attacks. As many as four Wildcats were shot down by U.S. anti-aircraft fire, as well as several Vals. 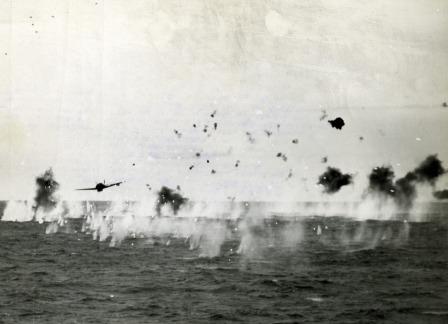 Because of the effective anti-aircraft fire from the U.S. ships, plus evasive maneuvers, the bombs from the first nine Vals missed Enterprise. However, at 16:44, an armor – piercing,  delayed-action bomb penetrated the flight deck near the aft elevator and passed through three decks before detonating below the waterline, killing 35 men and wounding 70 more. Incoming sea water caused Enterprise to develop a slight list, but it was not a major breach of hull integrity.

Just 30 seconds later, the next Val planted its bomb only 15 ft away from where the first bomb hit. The resulting detonation ignited a large secondary explosion from one of the nearby 5 in guns’ ready powder casings, killing 35 members of the nearby gun crews and starting a large fire.

About a minute later, at 16:46, the third and last bomb hit Enterprise on the flight deck forward of where the first two bombs hit. This bomb exploded on contact, creating a 10 ft  hole in the deck, but caused no further damage.

Seven Vals  then broke off from the attack on Enterprise to attack the U.S. battleship North Carolina. However, all of their bombs missed and all the Vals involved were shot down by either anti-aircraft fire or U.S. fighters. The attack was over at 16:48, and the surviving Japanese aircraft reassembled in small groups and returned to their ships.

Both sides thought that they had inflicted more damage than was the case. The U.S. claimed to have shot down 70 Japanese aircraft, even though there were only 37 aircraft in all. Actual Japanese losses—from all causes—in the engagement were 25 aircraft, with most of the crews of the lost aircraft not being recovered or rescued. The Japanese, for their part, mistakenly believed that they had heavily damaged two U.S. carriers, instead of just one. The U.S. lost six aircraft in the engagement, with five pilots lost.

Although Enterprise was heavily damaged and on fire, her damage-control teams were able to make sufficient repairs for the ship to resume flight operations at 17:46, only one hour after the engagement ended. At 18:05, the Saratoga strike force returned from sinking Ryujo and landed without major incident.

The second wave of Japanese aircraft approached the U.S. carriers at 18:15 but was unable to locate the U.S. formation because of communication problems and had to return to their carriers without attacking any U.S. ships, losing five aircraft in the process from operational mishaps. Most of the U.S. carrier aircraft launched just before the first wave of Japanese aircraft attacked failed to find any targets. However, two SBD Dauntlesses from Saratoga sighted Kondo’s advanced force and attacked the seaplane tender Chitose, scoring two near-hits which heavily damaged the unarmored ship.

The U.S. carrier aircraft either landed at Henderson Field or were able to return to their carriers after dusk. The U.S. ships retired to the south to get out of range of any approaching Japanese warships. In fact, Abe’s “Vanguard” force and Kondo’s “Advance” force were steaming south to try to catch the U.S. carrier task forces in a surface battle, but they turned around at midnight without having made contact with the U.S. warships. Nagumo’s main body, having taken heavy aircraft losses in the engagement and being low on fuel, also retreated northward.

Meanwhile, the Cactus Air Force aviators of Marine Fighting Squadron 223 had turned in a brilliant performance that afternoon, intercepting the strike of fifteen bombers and fighters from the carrier Ryujo. They repelled the raid before it ever darkened Henderson Field’s gravel runway, shooting down six Zeros and ten Betty bombers.

The next day both fleets groped for each other. Meanwhile, the American carrier Wasp raced north finished with refueling and positioned herself east of Guadalcanal expecting Japanese movement there, but found none.

Believing that two U.S. carriers had been taken out of action with heavy damage, Tanaka’s reinforcement convoy again headed toward Guadalcanal, and by 08:00 on 25 August they were within 130 nmi of their destination. At this time, Tanaka’s convoy was joined by five destroyers which had shelled Henderson Field the night before, causing slight damage. At 08:05, 18 U.S. Cactus AF aircraft attacked Tanaka’s convoy, causing heavy damage to Jintsu, killing 24 crewmen. The troop transport Kinryu Maru was also hit and eventually sank. Just as the destroyer Mutsuki pulled alongside Kinryu Maru to rescue her crew and embarked troops, she was attacked by four U.S. B-17s from Espiritu Santo which landed five bombs on or around Mutsuki, sinking her immediately. Tanaka transferred to a destroyer and, sent Jintsu back to Truk, taking  the convoy to the Japanese base in the Shortland Islands.

Both the Japanese and the U.S. elected to completely withdraw their warships from the area, ending the battle. The Japanese naval forces lingered near the northern Solomons, out of range of the U.S. aircraft based at Henderson Field, before finally returning to Truk on 5 September.

The battle is generally considered to be a tactical and strategic victory for the U.S. because the Japanese lost more ships, aircraft, and aircrew, and Japanese troop reinforcements for Guadalcanal were delayed.

The Japanese had failed to land their reinforcements, had lost a carrier and a fast transport ship and suffered damage to several other warships. They largely abandoned daylight operations in the Solomon Islands, but retained control of the seas at night.

On the American side the Enterprise traveled to Pearl Harbor for extensive repairs, and was out of action until mid-October, but she returned in time to take part in the fourth of the Guadalcanal naval actions, the Battle of Santa Cruz (24-26 October 1942)

The U.S. lost only seven aircrew members in the battle. However, the Japanese lost 61 veteran aircrew, who were hard for the Japanese to replace because of an institutionalized limited capacity in their naval aircrew training programs and an absence of trained reserves. The troops in Tanaka’s convoy were later loaded onto destroyers at the Shortland Islands and delivered piecemeal, without most of their heavy equipment, to Guadalcanal beginning on 29 August 1942. The Japanese claimed considerably more damage than they had inflicted, including that Hornet—not in the battle—had been sunk.