I remember the things of the past four years. They are as much a part of me now and forever as my very soul. The years of my life may be many or may be few, but I’ll remember . . .

VF-6 Hellcat on the USS Hancock

The President of the United States of America takes pleasure in presenting the Navy Cross to Lieutenant, Junior Grade Richard L. Newhafer  for extraordinary heroism in operations against the enemy while serving as Pilot of a carrier-based Navy Fighter Plane in Fighting Squadron SIX (VF-6), attached to the U.S.S. HANCOCK (CV-19), in a strike against major units of the enemy fleet, including aircraft carriers, battleships, cruisers and destroyers, in Kure Harbor, Japan, on 25 July 1945.

I’ll remember a glistening bar atop the El Cortez in San Diego in September of 1943, cloudy with cigarette smoke and noisy with a hard and forced laughter. I remember the gold wings and battle ribbons on the chests and Bates sitting beside me looking westward out over the sea.

‘Well, Batesy, tomorrow we go. A week from today we’ll be in it. So tonight we either get drunk or go to church. What’ll it be?’ And Bates smiled and ordered a drink for the house.

I’ll remember sailing past Diamond Head on a clear, incredibly blue day. The beach and the pink of the Royal Hawaiian and the soft warm green of the rolling hills behind Pearl Harbor had a significance of their own that seemed to deny the very existence of war. I remember the tightly packed ships standing at anchor in the harbor and the ugly, rusted turrets of the battleships sunk on December 7th. The beauty of the hills and mountains lying in the background was incongruous with the magnificent display of power and might lying in the water like a lion ready to spring….

I’ll remember a quiet ready room in the hours before dawn and the grim, strangely old faces of the pilots as they awaited ‘Launch Aircraft.’ I’ll remember how soft that cloud looked the day over Wake Island, and how quick the Zero came out of the sun. He came from four o’clock and above, but I saw him against the background of lazy clouds. He looked like a fiery rose as he tumbled earthward. I caught him with a thirty-degree angle burst and blasted him fifteen thousand feet into the ocean beside Wake Island. We sent you more Japs, Major Devereaux.

I’ll remember a gray Sunday morning on the pitching hanger deck of the carrier and the look on the Skipper’s face as the weighted sack containing his wingman slid from under the flag on the edge of the deck and slipped into the choppy waters. I can’t recall the song they play at a naval burial at sea, but it is poignantly sad and beautiful. But I do remember the Skipper’s softly murmured, ‘All secure Bill . . . and good luck.’

I’ll remember the wardroom after the big fight at Palau, and Pope standing against the bulkhead, his face tired and lined by something that no man has yet been able to describe with words.

‘The bastard was hiding in a cloud,’ he said. ‘I didn’t see him until he’d opened fire. Then it was too late. Bates didn’t know what hit him. He burned.’ And there is your war. Simple. Brief. Be quick and neat and cold about it. Make your eyes hard and learn to laugh and grow old in a few hours. Never be a seeker but take today for what it’s worth, forget yesterday and to hell with tomorrow. Tomorrow’s strike will be a tough one and may be a last one, so forget it . . . and Bates burned . . . So Long Batesy!

I’ll remember a lovely little palm-studded islet in the Marshall’s . . . the broad toothless grin of an old native as he paddled by in his canoe . . . the deathlessly calm and clear water near Espiritu Santo. I’ll remember a Navy nurse aboard the Solace and the unforgettable tropic moon as we danced on the deck.

‘It can’t last forever, my lovely, and someday all this will be ours forever. So let’s take this moment, hold it close to our hearts . . . let’s stand here on the deck in the moonlight, under these millions of stars, ten thousand miles and a year from home, and pretend we’re at the country club at Westchester, or the beach at Melbourne or maybe just the drugstore in Cairo, Illinois. And if we can’t pretend, then it’s okay, let’s forget it and go out quietly and do what we’re told and win this damn war and find the lasting peace or maybe just die like Bates.

thousand feet over Tokyo Bay, circling to begin our attack. Then it came . . . it crackled over the air from Nitrate Base some two hundred miles out to sea . . . it roared over the water from the carrier to the planes and brought with it all the hope and unreasoning happiness that salvation can bring. It brought tears and laughter and a numb sense of unbelief. It was old news to most of the world by the time but to us it was wonderfully new. Again and again it pounded in our earphones.

I’ll remember a dirty, dusty, winding street in Yokosuka . . . the funny looking Jap policemen with their big swords, who saluted every officer who passed within sight of them . . . the disgusting poverty of the people . . . the dead smell over the whole city . . . the grandeur of Fujiyama . . . the tiny old woman sitting on a corner curb in Yokohama, her head bowed and resting on her arms. When she raised her head as we passed she looked ten years older the God . . . the ugly young girls standing in the alleyways beckoning and grinning with their rotting teeth, unaware that they were too repulsive even to ply the oldest profession on earth . . . trying to buy a bottle of ‘sake’ and getting cleaner fluid instead, and the look on Burns’ face when he took a swallow of it . . . Haley trying to buy a kimono and pointing to one the proprietor’s wife was wearing and the proprietor thinking Haley wanted to buy his wife . . . the last glimpse of Japan as the towering snow-capped peak of Fujiyama faded over the horizon.

I’ll remember sailing under the Golden Gate and the pretty young girls in blue uniforms lined up at the dock to greet us . . . the first sound of my mother’s voice on the telephone . . . the wild farewell parties as the squadron broke up . . . the hearty promises to meet again when we all knew never would, that the whole thing was over.

‘Well, Willy, take it easy, lad. I’ll be out your way before long. Sure I’ll look you up. We’ll tie a beauty on. Yeah, it’s been a lot of fun. Thanks for everything. Sure. So long fella.’

I’ll remember the first breathless sight of home . . . tears in loving eyes . . . the hard handclasp of friends . . . trying to find something to say when they wanted to know what it was like out there. If it was tough, and how did it feel to kill a Jap. You couldn’t tell them they weren’t talking to the same person now, that you weren’t the same entity you were then. Then you were part of a machine, a part of six .50 caliber machine guns, part of a pair of steady wings and a roaring engine, part of cloud cover and a clear sky. You were his target and he was yours and he wasn’t quite good enough. That’s all. Nothing more. But there aren’t and never will be words to explain it. You have to live it.

I’ll remember the gusty briskness of the wind off Lake Michigan . . . the flow of traffic down the Boulevard . . . Randolph Street at night and in the early dawn . . . the first civilian suit and the gold eagle in the lapel . . . taking the wings and row of ribbons off the uniforms and laying everything away till the world goes mad again someday.

And this last I don’t have to remember because it belongs to the present and is a part of me now. It’s the shutting off . . . the forgetting . . . the starting anew. It’s putting the past four years away, storing them and all that belongs to them in the back of my mind where they can play no part in the present or future. They were full years, each of them choked to the brim with life and death and excitement and glory. The blood ran quick and hard. They have no place beside the years now and ahead. 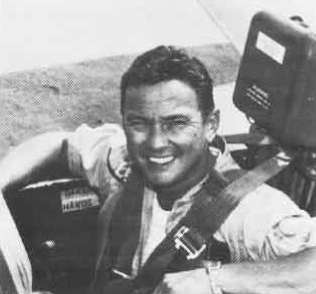 It was reprinted, (in the December 1976 issue of Naval Aviation News) with permission of his widow, Frederica B. Newhafer.

Newhafer shot down nine Japanese planes and helped sink the battleship Ise. He was awarded the Navy Cross, three DFCs and numerous other awards. He flew from the deck of Essex, Yorktown and Hancock.

After the war he served as a civilian adviser to the South Korean Air Force. During the Korean conflict he flew Navy jets. He served  with the Navy’s Flight Demonstration Team, (1954 & 1955) the Blue Angels, before ending his service career.

Newhafer authored six novels, including The Last Tallyho, was a television writer and a member of the Writers’ Guild. He was at work on another book when he died in 1974 at the age of 52, a Lieutenant Commander in the Naval Air Reserve. 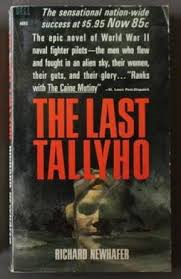