1942- The Year of the Aircraft Carrier; Part 12 – Guadalcanal, From the Start, A New and Different Context; First Day Overview (1/4)

RS Note: With the close of Chapter 2 of the Testimony of Pilot series, this posts continues with the 1942- The Year of the Aircraft Carrier series picking up with the story of the initial attack on Guadalcanal 7-8 August, 1942. Given the long break here is the link to Part #9 the Guadalcanal Introduction: http://rememberedsky.com/?p=2201

An hour before dawn on 7 August, Dog Day, Fletcher’s three TF-61 carriers (with Noyes, CTG-61.1, in tactical command) closed Point Victor, thirty miles west of Guadalcanal. … TF-61 was ready to begin the first Allied counter-offensive of the Pacific War. Ghormley exhorted Fletcher, Turner, and McCain, “Electrify the world with news of a real offensive,” and “Sock ’em in the Solomons.” 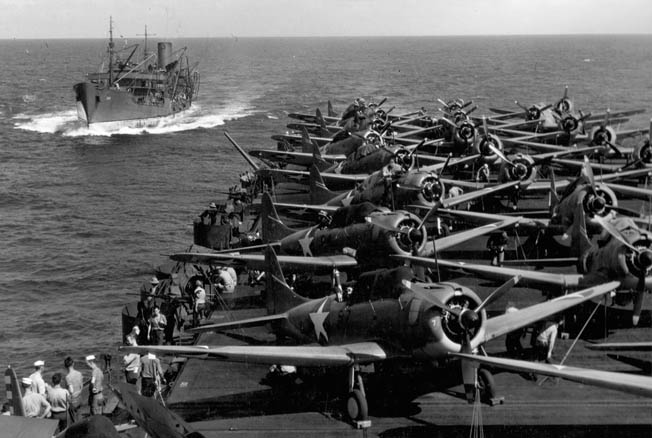 Reflecting on the Battle (Campaign) of Guadalcanal, most likely the first thought to mind is the brutal aspects of Marine combat in terribly hot, wet, insect and snake infested jungle with an enemy who simply would not give up. But as noted previously the U.S. victory  was a function not only of the land battle but also of the linkage of land, sea and sea and  land based airpower.

The intention of this post in the Guadalcanal portion of the stories of the CVs in 1942 is not to retell the actions of August 7-9 1942, but rather to use the early events to highlight several serious problems that began to emerge. These problem areas would remain throughout the Guadalcanal Campaign and are telling context for the last two carrier battles of 1942 – Battle of the Eastern Solomon’s and the Battle of the Santa Cruz Islands. Indeed, their resolution can be viewed as stepping stones in large part for the U.S. victory in the Pacific.

In that context the first two days are mostly highlighted by four significant aspects:

To provide an overview of the issues arising out of the Guadalcanal campaign the following is composed of excerpts from The Combat Narrative program. 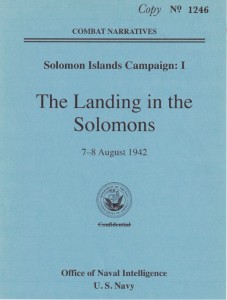 The Combat Narrative program originated in a directive issued in February 1942 by Admiral Ernest J. King, Commander in Chief, U.S Fleet, that instructed the Office of Naval Intelligence to prepare and disseminate these studies. A small team composed primarily of professionally trained writers and historians produced the narratives. The authors based their accounts on research and analysis of the available primary source material, including action reports and war diaries, augmented by interviews with individual participants. Since the narratives were classified Confidential during the war, only a few thousand copies were published at the time, and their distribution was primarily restricted to commissioned officers in the Navy.

Preliminary Air Plans The understanding reached by Admiral Ghormley and General MacArthur for the cooperation of the two air forces of their respective areas developed with the situation. The basic agreement was that during the Tulagi-Guadalcanal action the Supreme Commander, Southwest Pacific Area, would provide for the interdiction of enemy air activities westward of the operating area, the dividing line between the South Pacific Area and the Southwest Pacific Area to be the one hundred fifty-ninth meridian from the equator southward. Admiral Ghormley further directed Admiral McCain, commander of the South Pacific Air Forces, (Task Force MIKE) to arrange with General MacArthur for the coordination of aircraft scouting by the land-based forces of the two areas. 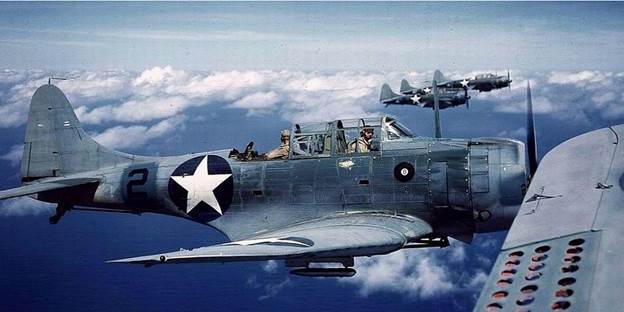 Air Support Force The air support force, consisting of the carriers Saratoga, Enterprise, and Wasp, and their screening ships to cooperate with Admiral Turner’s amphibious force by supplying air offense and defense, while also protecting itself from enemy air attacks and making such air searches as were ordered or might seem advisable.

The “flight sequence” provided for the Wasp’s air group directed that Flight No. 101 take off at 0530 on D-Day, that it should consist of 16 VF, that is should “proceed to Tulagi-Gavutu area of Florida Island arriving 15 minutes before sunrise (0630); destroy enemy fighter planes and patrol bombers, motor torpedo boats, and submarines in Tulagi and Gavutu Harbors; destroy enemy landbased planes on beach at Halavo; attack antiaircraft installations on Gavutu and Tanambogo Islands with remaining ammunition; and return to carrier on completion of mission…

Synchronizing the flights with the attacks of our sea and land forces was only one side of the problem. The other, almost equally important, was the maintenance of smooth operations aboard the carriers, so that decks would not become congested with planes taking off or landing, and so that at least one squadron of fighters would always be alert and in readiness in the event the carriers were themselves attacked.

Admiral Noyes’ orders provided, in addition to the detailed flight schedules, for the following general procedure:

Air attack was carried out by 85 carrier planes, 44 assaulting enemy positions on Guadalcanal, 41 those on Tulagi. The Wasp provided 16 VF, 15 VSB, and the Air Group Commander over Tulagi; the Saratoga, 12 VF, 23 VSB, and the Air Group Commander over Guadalcanal; and the Enterprise, 8 VF for strafing at Guadalcanal and 9 VSB for bombing at Tulagi. The Wasp also sent out early in the morning 7 VT to bomb enemy installations on the eastern end of Florida Island and on Malaita. In addition to bombing flights which continued throughout the day, the carriers maintained combat patrols over both the carrier and the transport areas and vectored out many search flights. 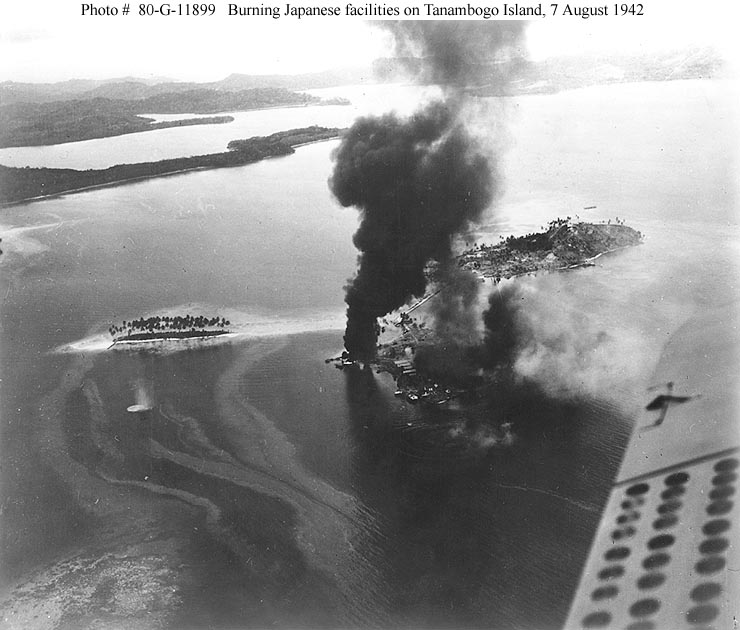 The first flights from the Wasp, Admiral Noyes’ flagship, were 16 and 15 scout bombers. These flights had been assigned specific targets and areas in Tulagi, Gavutu, Tanambogo, Halavo, Port Purvis, Haleta, and Bungana. They arrived over their targets just as day was breaking. The Wasp fighters headed first for enemy aircraft on the ground or water, destroying 15 patrol craft and 7 seaplane fighters. The bombers concentrated their attention on antiaircraft and shore batteries, putting many of them immediately out of action. Except for 1 fighter, all planes of the first flights returned to the Wasp at 0715 and landed on board. The missing VF made an emergency landing on the Enterprise, refueled and returned home later.

At 0700 9 TBFs, loaded with four 500-pound bombs each, left the Wasp to bomb Japanese resistance centers on Makambo Island and in the prison on Tulagi Island. These centers were silenced. Thereafter planes were launched as scheduled throughout the day, while a continuous attack group of four fighters and nine scout bombers was maintained over the transports in the Tulagi sector. These planes received orders as to targets from the Air Group Commander, Lt. Comdr. Wallace M. Beakley, above the island, or through him, from the Air Support Director Group aboard the McCawley.

The Enterprise furnished the personnel for the Air Support Director. These officers set up the communications necessary for direct control of the Air Support Force assigned to Group XRAY off Guadalcanal, and were given the radio call “Orange Base One.” Being in touch with the Senior Carrier Group Commander in the air over Guadalcanal, “Orange Base One” soon came to control and handle radio traffic between all the ground forces and all supporting aircraft overhead. The Air Support Director Group of “Orange Base Two” in the Neville, which was stationed off Tulagi, acted only as a stand-by unit. The Fighter Director for the entire force was stationed in the Chicago and was called “Black Base.”

The commander of the Saratoga Air Group, Comdr. Harry D. Felt, was assigned tactical command of the air units operating over the Guadalcanal area in the first few hours of the attack. His force consisted of 12 VF, and 23 VSB. All opposition was quickly silenced. Soon after his arrival over Guadalcanal, Comdr. Felt made a continuous reconnaissance of the area, determining that opposition did not exist in some places where it had been expected and that existing installations often varied considerably from descriptions in intelligence reports. Following the Saratoga’s fighters over Guadalcanal, 8 planes of VF-6 from the Enterprise strafed antiaircraft emplacements and buildings on Lunga Field, and small boats and supplies along the beach from Tenaru to Kukum. They encountered little opposition and observed no aircraft or patrol boats.

As the Enterprise had been designated Fighter Control Ship for the three carriers and was primarily responsible for the protection of the carriers against enemy attack, her support of the land forces in Guadalcanal and Tulagi was less extensive than that of the other two carriers. By the same token, her activities in attempting to repel Japanese raids on our transport groups,  were more formidable.

Summaries would indicate that our carrier-borne plane losses for the 2 days’ operations were slightly smaller than those reported to Admiral Ghormley. The action reports state that the Wasp lost 3 fighters and 1 scout-bomber, the Enterprise 6 fighters, and the Saratoga 7 fighters and 1 scout bomber, or a total of 16 fighters and 2 scout bombers. They also show that Japanese plane losses, including those destroyed on the ground or water during the dawn attack of August 7th, were more than double our own, amounting to exactly 50, the Wasp accounting for 24 enemy planes of various types, the Enterprise 14, and the Saratoga 12.

When it is also considered that the enemy in 3 air attacks on the transport area was unable to hit and damage more than 3 of the 51 vessels assembled there, it cannot reasonably be said that the protection provided by the carrier air groups was as deficient as some of the fliers, in their more self-critical moments, seemed to believe it was.

The biggest surprise so far was that the carriers themselves had not been attacked, particularly as the enemy demonstrated he could strike hard at long distance. Kinkaid recalled, “We could not reasonably hope that Japanese search planes would fail to locate us during the period of our operations south of Guadalcanal—it seemed obvious we were there—but that is just what happened. Nor were we molested during this period by Japanese submarines.”

Fletcher could not count upon such good fortune lasting very long, and other serious matters demanded his immediate attention. It was high time to reevaluate the situation, and that is precisely what he did.

In their trial against the Imperial Japanese Navy (IJN) in the waters off Guadalcanal, the Navy mastered a new kind of fight. Expeditionary war was a new kind of enterprise, and its scale at Guadalcanal was surpassed only by its combatants’ thoroughgoing deficits in matériel, preparation, and understanding of their enemy. It was the most critical major military operation America would ever run on such a threadbare shoestring. Hornfischer

A note on sources: Similar to the Battle of Midway, the Guadalcanal Campaign has many story tellers. Of note, as mentioned previously is the intertwined aspects of land, sea and air in a type of fight not previously experienced. The intent of this series is to patch together those stories of the 1942 emergence of the aircraft carrier. That experience would evolve to a wholly different capability going into 1944.

While multiple sources have been used in the overall series, Part 12 (4 parts) is particularly dependent upon crafting its story line from the following:

This entry was posted in Year of the Carrier and tagged Aircraft Carriers, Airpower, Guadalcanal, War-at-Sea. Bookmark the permalink.