Morning After Reflection: 5 June 1942 “we sank a carrier”

They had no right to win. Yet they did, and in doing so they changed the course of a war. More than that, they added a new name— Midway— to that small list that inspires men by shining example. Like Marathon , the Armada, the Marne, a few others, Midway showed that every once in a while “what must be” need not be at all. Even against the greatest of odds, there is something in the human spirit— a magic blend of skill, faith and valor—that can lift men from certain defeat to incredible victory. 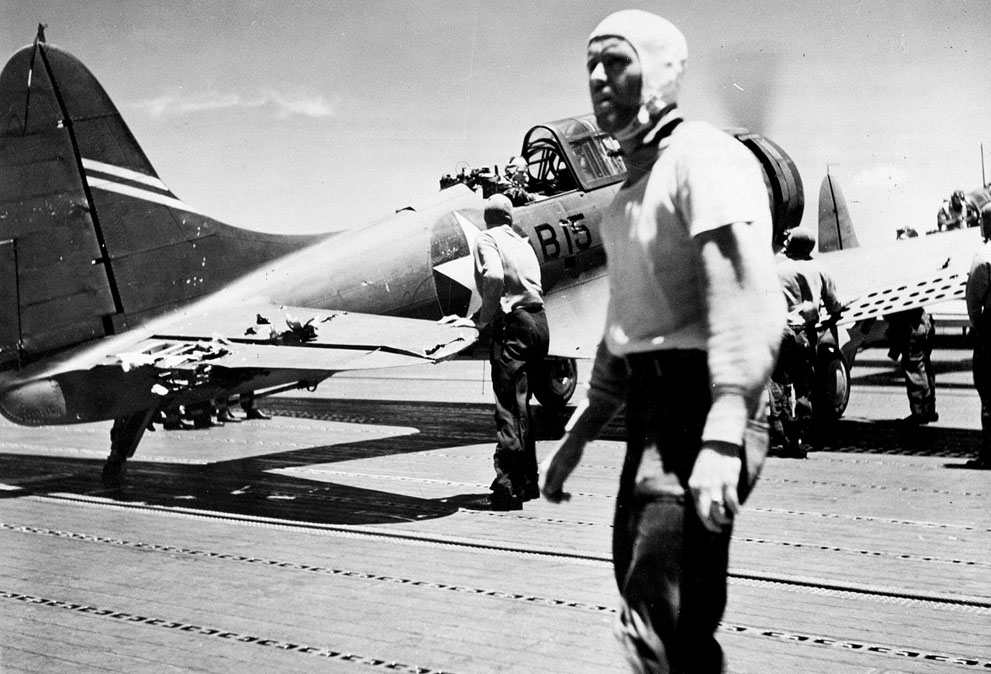 An SBD dive bomber (6B15) of Bombing Squadron Six, on the deck of USS Yorktown. The aircraft was flown by Ensign G.H. Goldsmith and ARM3c J. W. Patterson, Jr., during the June 4, 1942 strike against the Japanese carriers Kaga and Akagi. Note the battle damage on the tail.

For those who’ve followed this site, you know that in early June I always put together something on the Battle of Midway and always pay tribute to my first post flight school boss, LCDR Pat Patterson. See the 2013 post:

The report on the 13th would reduce VB-6’s losses to 7 pilots and 8 gunners with total Air group losses at 31 aircraft, 24 pilots and 25 gunners. (Note, then we must add Hornet and Yorktown losses – including all of Torpedo Squadron Eight – to understand the the magnitude of that battle, of that victory)

CONCLUSION: ENTERPRISE Air Group, both pilots and gunners, displayed a spirit of utter fearlessness, resolution and determination throughout all air actions. This spirit, though shared by pilots and gunners alike, found its highest expression in the person of the Air Group Commander, LtComdr C.W. McClusky, Jr. U.S.N. On June 4, prior to intercepting the main enemy forces, it was his decision, and his decision alone, that made the attack possible which lead to the destruction of a major part of the enemy forces. It is the considered opinion of the Commanding Officer that the success of our forces hinged upon this attack. Any other action on the part of LtComdr McClusky would inevitably have lead to irreparable loss to our forces.

The entire ENTERPRISE Air Group merits the highest praise and commendation for a hazardous job well done. In separate correspondence, recommendations for awards and citations will be submitted.

Pat had to abandon ship on Yorktown – jumping over the side. Picked up by a destroyer, he never stated when he actually returned to his squadron on board the Enterprise.

I’ve often wondered what thoughts were in his head on the 5th of June, but here is what is written in Walter Lord’s book:

Wade McClusky , leading the group, had a picture of a clean hardwood deck, an untouched island on the starboard side, some planes tuning up toward the stern. Earl Gallaher, coming in fourth, saw fountains of water from two near-misses, the blinding flash of his own bomb landing among the parked planes. Dusty Kleiss, seventh to dive, found the after end of the ship a sea of flames, the painted red circle up forward still untouched— then his own bomb changed that. And so it went until Ensign George Goldsmith, the 25th and last man down, had his turn too. By now the carrier was a blazing wreck, swinging hard to the right in a desperate effort to ward off further blows. Goldsmith kept her in his sights.

In the rear seat, Radioman James Patterson called off the altitude as they plunged down. During dive bombing practice they normally released at about 2,200 feet. This time 2,000 spun past the altimeter, and they were still going straight down. Then 1,500 and finally Goldsmith pulled the release. Patterson watched the results with amazement: “He had been the world’s worst dive bomber pilot during the practice hops I’d flown with him previously, but that day Ensign Goldsmith earned every dime invested in him as he put our bomb right through the flight deck, just aft of amidships.”

So here’s to you my friend, to Ens Lew Hopkins in SBD Dauntless 6B12 (awarded the Navy Cross and retired as an admiral), and all who shaped the course of carrier aviation.

Fly Navy, the BEST Always Have.

This entry was posted in War and Remembrance, Year of the Carrier and tagged Aircraft Carriers, Airpower, Attack, Battle of Midway, Strike Warfare, War-at-Sea. Bookmark the permalink.