Testimony of Pilot: The Silver Waterfall

Stephen Crane once said that he wrote The Red Badge of Courage because reading the cold history was not enough; he wanted to know what it was like to be there, what the weather was like, what men’s faces looked like. In order to live it he had to write it. This book was written for much the same reason.

Few battles have received more research, attention and words by historians and authors than Gettysburg and Midway. Each stands as an un-argued  hinge and view-port to the nature of that  war, its beginning, and its end. 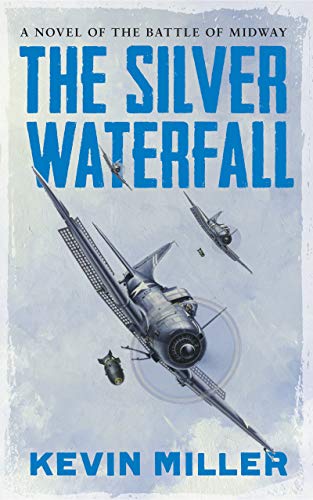 In his just released book The Silver Waterfall: A Novel of the Battle of Midway, author of the Raven One series centered on Navy F/A-18 action, Kevin Miller (Capt., USN Ret) in telling the story of the men and events of Midway, follows the approach of the highly acclaimed – 1975 Pulitzer Prize for fiction – The Killer Angels by Michael Shaara. Nothing in the events of the story is fiction; rather his approach  gives human feelings, thoughts,  and words to players at multiple layers during the June 1942 battle, as Shaara did for Lee, Longstreet, and Joshua Chamberlain and the soldiers at the Little Round Top battle at Gettysburg. As a former A-7 Corsair attack aviator and commanding officer of a F/A-18 strike fighter squadron, he knows well the human internal and external context of the combat pilot – with the not so common ability to express in an exceptional manner.

I was really honored to be asked by Kevin to read an early draft and comment. I’ve been fascinated with Midway for years and done some writing on this site in the Year of the Carrier series – Kevin’s telling was just outstanding!

If you’re going to read some historical fiction THE SILVER WATERFALL: A Novel of the Battle of Midway IS THE BOOK.

Here below is an excerpt:
(Note: “Sea Hag” is the pronunciation for CHAG – Commander Hornet Air Group)

Bill Evans could not get over it.

Skipper Waldron had just told off Sea Hag, and on the radio, so the whole Pacific Fleet could hear! Without even answering, Ring and the SBDs had continued southwest.

He glanced to his right. His roommate Hal held position in the formation. Down the line, the others maneuvered in a manner that resembled an accordion as they maintained their places out of the turn. Behind Evans, the XO’s division flew as one in trail.

What’s the skipper doing? he thought, still stunned that the CO had left the group formation. The rest of the squadron followed him; not to do so was unthinkable, but what was he thinking? In the TBD next to Waldron, Moose concentrated on flying form. By instinct, Evans checked the time: 0825.

Stretching his neck in both directions, Evans counted all fifteen Devastators. High to the left, the scouts and VB continued on in their big vee formations. Through breaks in the clouds, he saw the fighters in trail.

Waldron was head down in the cockpit, glancing up only to stay level, as he worked his plotting board. Ahead was a crisp – and empty – horizon, covered by scattered clouds. Any clouds were welcome. Evans checked their heading: west. Sea Hag led the SBDs and fighters southwest. Where is the skipper going? We’ll miss them to the north. Now finished with his plotting-board calculations, Waldron looked straight off his nose, not moving a muscle.

“Mistah Evans, what’s going on?” Bibb asked over the interphone.

“The hell with you!”

“We’re stayin’ with the CO, Bibb. Nothing on the horizon, but I bet we’re inside an hour from the Japs. Anything more and we’ll have to turn back for fuel.”

“Yes, sir, nine o’clock high. Can barely make them out. All the TBDs are here.”

“Good. Track the VB as long as you can. The Japs may find them first.”

Waldron motioned for them to continue straight ahead. He then turned to Evans and, with an open hand, pushed him away. Evans passed the signal to Hal, who passed it down the line. The TBDs opened up to form a scouting line, each aircraft scanning the sea ahead for anything: a mast, stack gas, AA puffs. Evans had seen the black marks the Hornet gunners had formed in training, had seen the newsreel images of the pockmarked sky over Pearl Harbor. He had never seen enemy antiaircraft but imagined he would in the next hour.

Once the XO’s division moved into position and took station, the entire 15-plane squadron was steady on 270 in a line abreast. In the middle of it, Evans was confident. He and his mates had flown this formation before. A scouting line. Find and kill the enemy. They were spread out over a mile, and Waldron led his obedient pilots below 1,000 feet. There, they would better pick up any irregularities on that stark line where the sea met the sky.

Evans’s senses were alive. He was aware of every cylinder firing, every wisp of slipstream that entered the cockpit. The sky between the clouds was the clearest he had ever seen, the sea a crystalline royal blue velvet. He was in a warplane, shoulder-to-shoulder with fourteen fellow pilots, the gunners behind them shoulder-to-shoulder with their fellows. All scanned the skies, checked the navigation, their manifold pressures, the gallons remaining, their guns, and the time. Evans couldn’t wait to write about this day, in detail, with the clarity of one who had been there, one who could remember with advantages.

The skipper would find them for sure; the old Oglala Sioux was never more determined. He sat calmly in his cockpit, scanning the horizon and his wing placement with a technique learned in flight school, a technique passed down to Evans and the others in Pensacola, a technique Evans himself would one day teach to the hordes of men cramming the recruiting offices to join him out here in a scouting line of armed aircraft. He glanced left and right, up and down the line. Torpedo Eight flew as one, not one plane drifting, maintaining perfect position on each other. Waldron led them into battle as he had trained them, modern day Zouaves marching to the sound of the guns.

The 2,000-pound Mk 13 below him swayed in place. Evans found he could handle this new sensation and trimmed T-3 as a natural extension of his being. His plane felt strong, poised to strike. Deadly. American steel, delivered by his hand, would strike against Japanese steel – and the men on the other side of it – sending them and their ship to Valhalla. One thousand yards, eighty feet at eighty knots. Evans was flying with his CO, the fightingest man on the ship. If only one man were going to get through, that man would be Skipper John Waldron, and, if Evans stayed close, he would have his best chance too. He would go back to Wesleyan, having done his duty here, to tell the next generation about the youth of this generation, condemned as slackers by the old-timers, thrust into war, into battle, for them, to save them and the society they all stood for. At that moment, it hit Evans that they were not fighting for the folks back home or America. Not for Sea Hag or Captain Mitscher. At that moment, he realized that he and Grant and Abbie and Whitey and XO Owens and Hal and Rusty and Moose, Bibb behind him and Chief Dobbs – and especially Skipper Waldron – were fighting for each other. He now understood what warriors through the ages had understood. And he sensed that here, over the trackless North Pacific, he had earned a place in their company.

The minutes droned on, and he wondered if there was anything out here. Maybe they had missed them. What would happen to the CO if they had, after he had told off Sea Hag? What if Sea Hag and the dive-bombers got to the Japs without having the TBDs to finish them off? It dawned on him that, either way, the CO had signed his own professional death warrant. Public insolence to the air group commander! And on the common radio circuit!

Still nothing visible anywhere on the horizon. He squeezed the interphone.

“Bibb, see anything back there? Any trace of our VB and VF?”

“Very well,” Evans answered. He checked his fuel flow; he couldn’t lean the mixture anymore lest he fall out of position. Their outbound leg would take them to the limit of their range, but Hornet’s expected Point Option position would make the return leg at least thirty miles shorter. Maybe closer to forty. Evans was confident they’d make it okay.

After 0900 and still nothing. Skipper Waldron hadn’t moved off heading as he led them at 112 knots. Evans twisted his torso to scan his rear quadrants. As he was trained, he focused his eyes on a patch of sky to better detect movement. Empty. Between breaks in the puffy clouds, the setting moon remained their only company as it beckoned them forward.

More fuel calculations. They had enough for another forty miles, but Evans knew that Waldron would press on, squeezing more range out of their charges and betting the ship would be at the designated recovery point. Or not. The skipper had said running out of gas was a possibility they had to prepare for. He scanned behind him, another habit.

Movement, a plane at five o’clock and over a mile. Evans watched as it overtook them, flying a parallel heading, and his heart beat faster. His eyes widened and he subconsciously pointed at it. Hal then turned to see what Evans was looking at.

“There’s a fighter on our tail,” Waldron radioed.

Evans couldn’t take his eyes off the enemy plane, painted green and moving fast. It looked big for a fighter, but it was fast. Everything was faster than a TBD.

“Lookin’, sir… Okay, ah’ve got it!” Evans felt their TBD lurch as Bibb adjusted himself to charge his guns. Next to Evans, the CO was padlocked on the intruder, keeping the unknown aircraft in sight as it continued ahead. They were at 600 feet; Waldron took them lower.

Evans could only give his best guess. “The Zero canopy is big, but that’s a long canopy… Could be a Nakajima.” He focused his eyes, and made out a red mark on the fuselage.

Evans was fascinated. The enemy.

The Silver Waterfall: A Novel of the Battle of Midway by Kevin Miller

This entry was posted in On their Shoulders, Testimony of Pilot -Series, The Gift of Wings. Bookmark the permalink.