Air War Vietnam: Remembrance at 40 Years – All Days Come From One Day

Note: This article was originally posted April 10, 2012 on the Project White Horse Blog

On April 10, 1972, Midway steamed under the Golden Gate Bridge in San Francisco, bound on a 7800 mile voyage to the Vietnam War Zone.  This in itself was not uncommon.  What made this cruise different from proceeding ones in the ship’s history was the fact that Midway was deploying over seven weeks in advance of the scheduled departure date with less than one week’s notice, with a vastly abbreviated training period, and with the additional handicap of a short, three day load out.

Shouldering these burdens, on April 29, exactly 19 days after departure, the aircraft of Carrier Air Wing Five were winging their way off USS Midway and towards the Republic of Vietnam.  Their mission, as part of the ship’s overall mission, was of two basic parts: one, they were to provide aerial support for the South Vietnamese forces in their efforts to turn back the tide of the Communist invasion from the north, and two, they were to protect the remaining Americans present in Vietnam as the withdrawal of United States ground forces continued.

All days come from one day, as the writer, the poet, the singer  says, so without attempting to channel Ernest Hemingway, this reflects basic remembrance of the day I and a lot of young men went off to war.  For me, it meant I would spend the 11thof April at sea – my one month wedding anniversary.  I left a beautiful young woman crying on the pier.  She drove from Alameda to the Golden Gate Bridge to watch MIDWAY change her life in ways completely unexpected a month earlier in the chapel at Point Mugu.  We weren’t following closely the day-day of the war nor privy to the back channel information of impending crisis in the war in Vietnam. Things had been rather quite there since the bombing halt up North in 1968 called by President Johnson after the Tet Offensive.

We had decided to get married thinking I was going to be at NAS Lemoore for at least a year before going on cruise. By  end of May, she and the other squadron wives would be bringing comfort to the wife of one Champ pilot as a confirmed resident in the Hanoi Hilton, and by end of summer Airwing Five wives would be dealing with 4 aircrew missing in action and 6 POWS. The fatalities would rise to 8 aircrew before MIDWAY came back to Alameda.  Not what she bargained for, at least not that quickly.

The offensive, Operation Nguyen Hue, better known as the ‘Easter Offensive’ began at noon on 30 March 1972, when an intense artillery barrage rained down on the northernmost ARVN outposts in Quang Tri Province just below the Demilitarized Zone.

By this time Vietnamization was the U.S. policy focus along with  American troop withdrawal from South Vietnam, which was well underway, but the old men – the hard core Communist revolutionaries -wanted no half loaf victory handed out on a tray of negotiations.  They wanted a military victory.

The ‘Easter Offensive,’ dropped all pretense of guerrilla war.  Instead, it was a three-pronged multi-division NVA cross-border invasion, well supported by tanks and heavy artillery. General Giap committed six NVA divisions to the attack in the northern portion of South Vietnam. Another three NVA divisions were ordered to strike in central South Vietnam, and a NVA/VC three-division force would attack north of Saigon.

With his reputation and his policy of Vietnamization at stake, Nixon implemented a massive buildup of air power in Southeast Asia and a broadening of the eligible targets. On April 6, U.S. fighter-bombers raided military targets 100 kilometers north of the demilitarized zone. As the available air assets made their strikes both in support of the beleaguered ARVN units and against targets in North Vietnam, squadrons of U.S. military aircraft redeployed from their bases in Japan, Korea, the Philippines and the U.S. mainland. Simultaneously, more aircraft carriers steamed toward Vietnam to join the two already on station there, until by late spring there were six aircraft carriers, each with approximately 90 craft, operating off the coast.

For the CAG 5 guys on MIDWAY who had walked aboard for the three week “mini-cruise” final preparation training event and examination prior to departing on a WESTPAC cruise to the Gulf of Tonkin, we received  the good news/bad news story on the night of 5 April as MIDWAY steamed south to the operating area off of San Diego. Bad news – we’re going west early.  Good news – we’re not going directly from here, we go back to Alameda for the weekend and leave on Monday. The airwing flew aboard the next day landing in gale force winds as Schoolboy literally raced north.

As for “training,” I hot-seated into the commanding officer’s plane and launched for two arrested landings. Forty + knots of wind is a bit of unusual operating conditions, and Skipper Harvey, got out of the a/c as I walked up with a very puzzled look on his face.  He had no idea what we’d been told the night before.

Anchors aweigh, my boy, anchors aweigh. No passing Go, straight to war, nod to South Vietnam and head for the Red River Valley. First combat mission 30 April, support the full on conventional war defense of An Loc – tanks and all (TANKS???, this is not France in ’44, what the…?) – for a few days , then right to the heart of it up North on 10 May, first Alpha Strike on 13 May to a little spot adjacent to the Than Hoa Bridge and first sight of Cyrillic.  Cyrillic- you know  Russian – the writing on the side of that big son-of-a-bitch Surface to Air Missile (SAM) that welcomed my best bud Floo and I to airwar North Vietnam. Dearest love Paulette, your new husband is a combat pilot now.

Over on the East Coast, on Friday 7 April, “all those thinking you’re heading for fun and sun in the Mediterranean step right on up, not so fast USS SARATOGA and airwing!”  Sara had just completed her mini-cruise and was intended to deploy in three weeks. Instead she left a day after MIDWAY, going around the Horn of Africa. Carol Reardon does a superb job in Launch the Intruders of telling the story of the VA-75  A-6 squadron Sunday Punchers on that cruise. Well written, worth the read.  A-6 squadrons are different than A-7 squadrons and East Coast things were different, but for those who went West on the 10th, you cannot help but see yourself in the mirror.

In May 1972, Nixon went on national television to tell the American people that to bring the North Vietnam government to the peace table, the United States would take the appropriate steps to terminate the North’s ability to continue the war. Major among these steps included mining all North Vietnamese ports, interdicting supplies to the North by U.S. forces, cutting rail and communication lines and resuming bombing in the North.

Operation Pocket Money, the mining of North Vietnam’s ports, commenced on May 9. U.S. Navy A-6 bombers sowed the waters with sophisticated mines set to activate on May 11, giving the many ships in Vietnamese harbors, including 16 from the Soviet Union, time to vacate. Only five actually left, and several ships, including Soviet ones, were subsequently damaged. Since during the previous year up to 85 percent of all imports had arrived through the port of Haiphong, including all oil, this was a devastatingly effective blockade.

Responding to the Easter Offensive led to a full on reassualt on North Vietnam – Operation Linebacker which would continue until 22  Oct, 1972.  Nixon took off the gloves.  Restrictions from the ’65-’68 Rolling Thunder attacks were mostly removed.  Planning was no longer in Lyndon Johnson’s office and Defense Secretary McNamara “stick-and-carrot” was now just stick. Indeed, President Nixon consistently went against his SECDEF to take the fight right onto Hanoi’s front door step. He believed he and America were being tested.  Air power – Air Force and Navy – were the answer.

The invasion of 1972 saw the first enemy use of massed armor coordinated with infantry and artillery in a fashion that the American generals, trained in European-style mechanized warfare, would be quite familiar with. In fact, the overt invasion by the North proved to be the opportunity that American military and planners had long dreamed of: to lure the elusive Communists into the open in a conventional, set piece battle. Only in this type of conflict could the United States huge advantage in firepower and mobility be effectively exploited.

Cutting rail and communication lines and interdicting land-based supplies was accomplished to much greater effect than during attempts earlier in the war. Precision-guided munitions were introduced. B-52s were heavy players as were the AC-130 gunships down south. The army of South Vietnam (ARVN) even with uneven leadership stood tall in the saddle.  Giap’s logistics flow was reduced to a trickle. All combined and finally with proper use of air power, the victor from Dien Bien Phu and Tet got his ass handed to him.

One thought, not stated yet. There’s lots of writing on the VN War and on use/miss-use of Air Power.  Rolling Thunder gets lots of words on ineffectiveness. But what’s not found, unless you get into the more historic analysis by people with credentials significant enough to understand, is how truly effective air power was in staving off a major major effort by the  NVN politburo to win the war outright while Nixon was still President and America was still involved.  If you strip off the fuzz of who, why, why not, and just look at how the air war was fought in this period, you find a different picture, a unique story of our eleven month deployment.

After the Easter Offensive, North Vietnamese generals commented it would be three to five years before they could mount another offensive.  After the Christmas bombings of Hanoi and Haiphong, North Vietnam had nothing left. The war delivered by Air Force and Navy pilots had served its purpose. On a personal level for many of the aircrew, Mission  Number One was complete: Our Prisoners Of War came home.

That “deep story” we earned, we own. 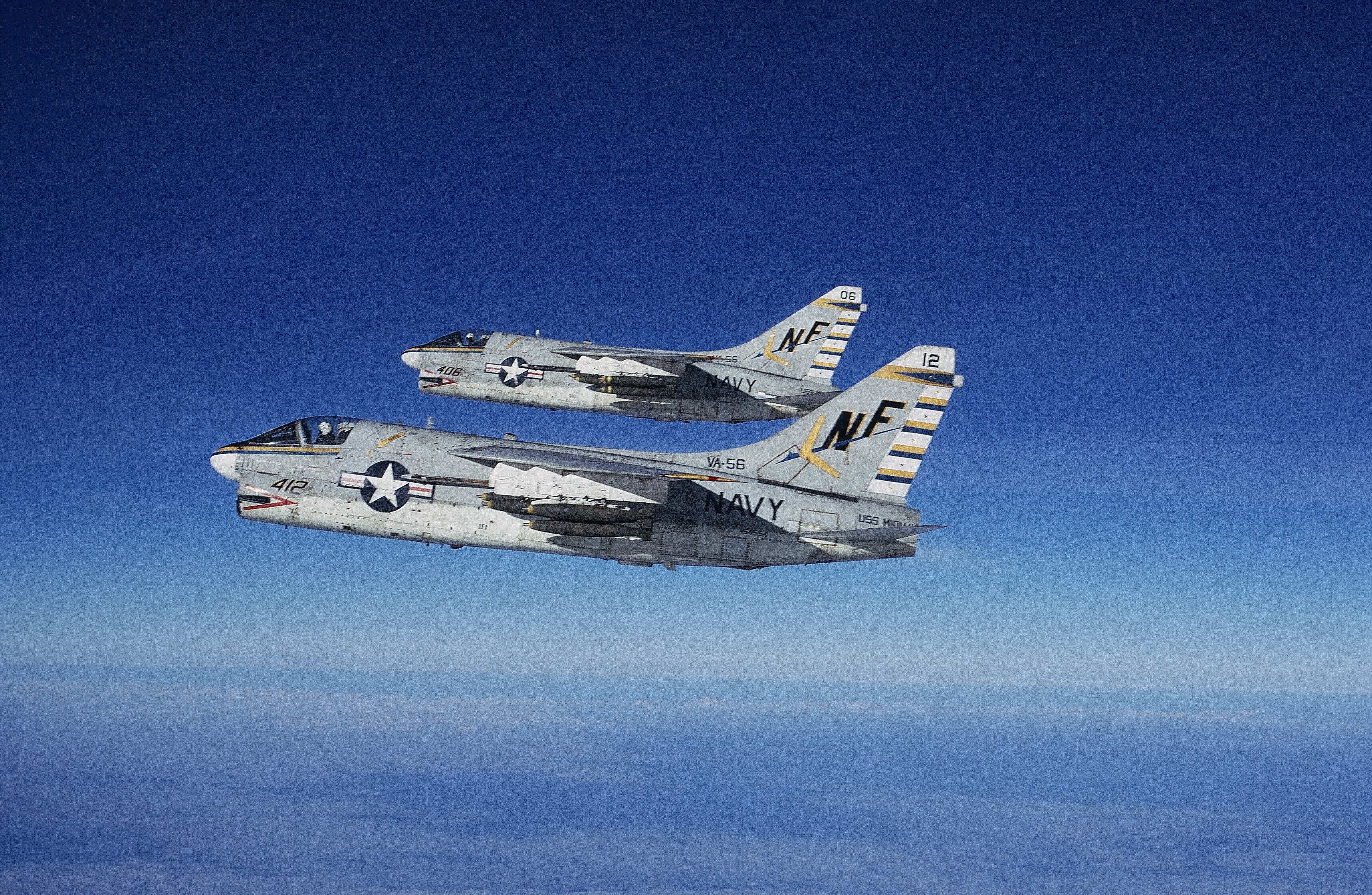 Al Nichols was that first combat loss, shot down and captured 19 May. Al was a combat experienced A-1 Sky Raider “Spad” guy.  Sobering. There would be more and worse.

In successfully carrying out her mission MIDWAY was, at the same time, also helping to ensure the more long range objectives: the eventual release of American prisoners of war held captive in North Vietnam, and the end of Communist aggression in the free world. 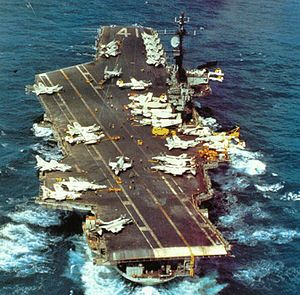 It is perhaps fitting that MIDWAY could demonstrate her fulfillment of the Navy Creed during this cruise, for 1972 saw the 30th anniversary of the battle from which she takes her name; the Battle of Midway.  It was during this battle that the aircraft carriers proved their importance in naval warfare and their effectiveness as a mobile weapons system.

Launch the Intruders by Carol Reardon

This entry was posted in Testimony of Pilot - RS previously published, Vietnam War, War and Remembrance. Bookmark the permalink.