Few missions are more dangerous than rescue of a downed aircrew behind enemy lines.  Needless to say, a slow moving helicopter is an easy target. The aircrew location must be exact, few search planes escaped damage,  suppressing enemy fire critical.  Losses could escalate immediately, yet no matter the threat, no effort is left undone, if there’s even the slightest change of getting one of our own out before they can be captured. Many of the most heroic events of the Vietnam war were rescue missions. These were the Sandy missions and in 1972 included the Air Force A-7D Corsair II and the HH-53 Jollie Green Giant helicopters. (Carriers in the Gulf of Tonkin often hosted Jollie Green Detachments onboard.  Needless to say, these balls of steel AF dudes always found a welcome and invite down to the bunkrooms for some hiden/forbidden young Scotch.) The story (in two parts) of one of those aircrew rescues deep inside North Vietnam is Remembered Sky’s next offering in the War and Remembrance thread. The whole comes from Major Bob Hipps (USAF Ret). It’s in two parts because the first part is about the A-7D Sandy mission. The second part relates the equally dangerous F-4 Phantom Fast FAC mission without which the rescue could not have been accomplished.

More about Hippo (like me a Nashville boy/mutual friends, etc) in the second part, but note this story and the send to Remembered Sky is case perfect of what I want this site to be about –  people, organizations, airplanes, missions, all  in a tapestry of flying.

Three weeks after the 354th Tactical Fighter Wing arrived at Korat Royal Thai AFB in mid-October 1972, the wing, USAF’s first A-7D outfit committed to combat, was handed a job for which it hadn’t trained–the Sandy mission, locating and protecting downed aircrews and coordinating action in the pick-up area. The 354th set up a crash training program, using former Sandy and FAC pilots as the nucleus of its new search and-rescue unit.

About a week later, an F-105 Wild Weasel, also from Korat, was downed at night 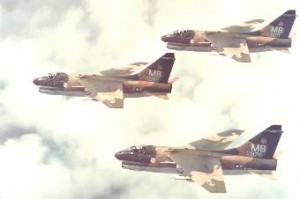 near Thanh Hoa on the coast, about 90 miles south of Hanoi. The next morning, flying in very bad weather, three of the wing’s Sandys located the crew part way up a ridge line. Pickup was set by the Rescue Coordination Center for dawn the next day.

At 4:30 a.m. on Nov. 17, five 354th Sandys, followed shortly by six A-7 smoke birds, lifted off the runway at Korat, led by Maj. Colin A. “Arnie” Clarke, the mission commander and a former F-100 Misty FAC with more than 800 hours of combat time in three previous SEA tours. They rendezvoused with HH-53 Jolly Green rescue helicopters above an overcast about 70 miles west of Thanh Hoa. Clarke told the HH-53s to hold while he and his wingmen, Capts. Don Cornell and Dave Sawyer, looked vainly for a break in the clouds. Clarke made several instrument letdowns into narrow valleys, using his Projected Map Display (PMD) and radar altimeter. Each time the ceiling was too low and the valley too narrow to turn in. There were no passes open from the west.

Clarke then took his wingmen out over the Gulf of Tonkin, where the two held as he worked his way down through heavy AA, automatic weapons, and SAM defenses. No HH-53 could make it past those missiles and guns, but Clarke was able to pinpoint the Weasel crew and mark their location on his PMD. Back on top, he picked up his wingmen and the smoke birds and then flew down again to show them where the men were hiding. The A-7s, particularly Clarke’s, took many .51-caliber hits in the pickup area.

Clarke knew what was going through the survivors’ minds. He had been there twice himself on earlier SEA tours. He also knew that the downed men would be found by the enemy before long. It was now or never. Flying up a valley from the east under increasingly lower clouds, he orbited and called one of the HH-53s to do a direction-finding (DF) letdown on him. The Jolly pilot came in, but, low on fuel, had to leave. It was now six hours into the mission.

A frustrated Clarke climbed up through the overcast to refuel and regroup his forces for another attempt. Returning above the clouds, he learned that the pickup would have to be made without delay because the second Jolly was short of fuel. There was no time to search for an open pass. Without hesitation, Clarke dove into a valley filled with broken clouds down to the deck and called the second HH-53 to DF down on him. Flying 360-degree turns to stay with the Jolly, he led it to a point near the survivors, using terrain masking to protect the chopper from guns in the pickup area. He told the pilot to hold while he and his wingmen went in to quiet the guns and direct the smoke birds to lay a screen.

Then came an unpleasant surprise. He spotted another .51 gun only a few feet above the survivors. It had to be knocked out before the chopper came in.

At this point, the HH-53 pilot, who apparently thought he had been cleared in, picked up both survivors and started to climb out directly past the gun. Clarke called the pilot to stay low and turn while he hosed the gun pit with 20-mm shells, flying so low he took a ZPU round in the A-7’s nose. On his final pass as the chopper made it safely out of the area, Clarke was hit “by something that felt like a 57-mm.” All his instruments went out.

Flying on instinct, he pulled up through the overcast, joined another A-7, and made an IFR landing at Da Nang, flying on the A-7’s wing. The “57-mm” turned out to be a .51 incendiary that exploded an empty wing tank, blowing in the side of the A-7’s fuselage.

For Clarke, it had been a grueling mission filled with world-class flying, great leadership, and courageous determination to save two fellow airmen. The Air Force Cross he was awarded for a superb performance during those 8.8 action-filled hours was well-earned that day.

This was the story in Air Force Times, but it doesn’t come close to telling all the tale.  Please see Part 2 for Bob Hippo Hipps equally daunting role in this aircrew combat rescue.

This entry was posted in Vietnam War. Bookmark the permalink.