The Mission of “Attack” – The Blown Slick Series Introduction

(See also :  Preface to Blown Slick -the series: The evolution of fighter, attack, and strike warfare)

He would go on to be Vice Chief of Naval Operations and head the FAA, but in mid-December 1971 Navy Captain Jim Busey was Commanding Officer of Attack Squadron 125 (VA-125), the squadron responsible for transitioning Naval Aviators into the A-7A/B Corsair II en route to their future combat squadrons, airwings and carriers. He had two combat tours (189 missions) in Vietnam under his belt in the A-4 Skyhawk and was the recipient of the Navy Cross,  and three Distinguished Flying Crosses. I had all of 20 hours in the A-7 and had flown my first flight with Capt. Busey on my wing as the instructor pilot only a few weeks before.  Four months later on April 30, 1972, as a new aviator in the VA-56 Champs, I would be night carrier landing qualified with 100 Corsair hours, and fly my first combat mission in Vietnam.

On that December afternoon at Naval Air Station Lemoore California, Capt Busey had called an “all pilots” meeting including the experienced instructors and the young aviators in training – mostly on their way to a first operational squadron.  He began by noting that aircraft carriers were ships designated as CVAs and not CVFs.

This was not the stuff of O’Club wrangling between F-4 or F-8 fighter pilots and A-4/A-7/A-6  “attack” pilots, rather it was serious underpinning that the reason that carriers were CVAs – where the meaning was an attack carrier – was the simple fact that aircraft carriers and Navy air’s reason for being was to carry home attack to America’s enemies. He indicated he meant no disrespect to the fighter community – and indeed they got loaded with bombs often enough – but their role as air-air mission squadrons was to insure that the attack aircraft got to the target and got out safely. We the attack guys – were the reason everything else was there. This wasn’t a “rah rah win one for the Gipper” talk, Busey was 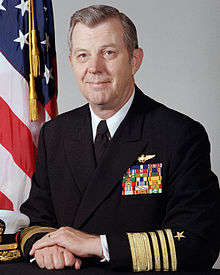 dead serious and straight to the point.  When it was over, the puzzled looks indicated that none of us quite understood why the talk and the emphasis.  Months later with multiple combat missions into North Vietnam under my belt, I surmised that in his position, Capt Busey knew a hell of a lot more about what was going on and would probably occur in Southeast Asia in a fairly short time than the news or any of us had any idea.

His experience included the USS Oriskany (CVA-34) war cruise in ’67-68.  During that combat tour, CVW-16 suffered the highest loss rate of any naval air wing during the Vietnam conflict, losing half of assigned planes – 29 to combat damage and another 10 to operational causes. and had 20 pilots killed and another 9 taken prisoner. The POWS included the airwing commander, James Bond Stockdale, his VA-163 squadron CO, Harry Jenkins, and squadron mate John McCain.  He knew what a restart of bombing missions up north would mean, and I’m guessing he saw it as his duty to give a heads up as best he could given security constraints to those who would soon be back over North Vietnam. North Vietnamese Army units invaded South Vietnam in mass on the 30th of March 1972 – the Easter Offensive.  President Nixon responded with ordering a re-start of bombing in North Vietnam leading to Linebacker I operations.

As a result, Midway/CAG 5 deployed several weeks early – cancelling all of the final weeks of at sea work-ups, bypassing Hawaii, spending only enough time at Cubi to refuel and load ordnance, and finally, cutting a planned 10 day period flying missions in South Vietnam -working us into the game, so to speak – to only 3 before we moved to Yankee Station and Route Package Six missions. We had our first shoot-down and POW within days – Al Nichols, a combat experienced past Skyraider guy.

Remembered Sky began so as to tell that ’72-’73 story of USS Midway, Carrier Airwing Five and to further focus primarily on the Attack mission side. It emerged out of a long term frustration with, and almost impossibility of finding anything on the carrier and airwing that set the record in the Vietnam War for days on the line, and was one of only four to receive the Presidential Unit Citation – equivalent of Navy Cross at the unit level.  That of course is good old Schoolboy – USS Midway – and Airwing Five. For example, the very good book focused on the Navy side of the air-ground war Alpha Strike Vietnam has next to nothing, despite the fact that one of the story tellers, John Nicholson was a VA-56 CO in 68-69. Many books for whatever reason don’t even mention Midway as being there???

In addition, it has always seemed that air-air got more “words/books” than the attack “bidness,” and the only Midway/CAG 5 story with any legs at all is Mugs McKeon and his two MiG kills. (good story and well deserving telling), but…

While the initial writing was mostly about the Champs and A-7s, after meeting up with old friend Dave ‘Snako’ Kelly from A-6 VA-115, I found he had the same frustrations/misgivings on USS Midway and attack side stories. And so we jointly took on “attack” story telling.  Dave passed away last year but before he did, he got his book Not On My Watch published.

To convey the desired message the Rememberedsky story process has used the overlap of several “operational threads” and multiple series on particular aspects of that time frame.  The series to date are: 1) the ’72 war cruise and particular VA-56 Champ stories; with the addition of Dave Kelly’s (VA-115) stories; 2) The “Bad Day for Schoolboy” series focused on the accident on the night of 24 October; 3) Christmas ’72;  4) Operation Homecoming;   5) The”Flying Circus” – a generic category of various related stories on flying including stories from the Battle of Midway which I see as the real beginning of naval aviation and particularly the dive bomber mission which led to the attack squadrons and missions of Vietnam on into today’s strike fighter aircraft and missions.

While I remain open to further stories from anyone in regard to that ’72-73 time frame, with the tribute to Snako, I’ve started thinking about attack aviation in broader terms – how it has evolved, how it continues to change, and what/where does the multi-role strike fighter concept lead, and in particular, how does the F-35 Lightning II Joint Strike Fighter play in today’s diverse threat environment. The Preface to this series can be found here:

The airwings of 1942 Midway, of 1972 Vietnam, and even 1991 Desert Storm are very similar. Can that be said of the current and future strike fighter airwings? And indeed, the Air Force has a parallel track from post Vietnam, through Red Flag on into Desert Storm and Iraqi Freedom, with a current desire to have all “stealth” Tactical Fighter Squadrons. Future articles will discuss these issues, but for now this post initiates a new series on “attack” aviation. The intent is to address the application of future airpower as a function of the emerging extremely divergent capability-wise threat environments of one, irregular warfare and two, a return to a war-at-sea emphasis with a joint need wrinkle. This is the Blown Slick Series.