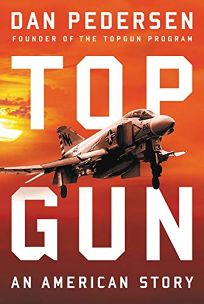 … we sent our people out there not trained for dogfighting. We sent the aircraft out there not equipped for dogfighting… and we got into nose-nose combat situations where neither the guy flying the airplane nor the airplane itself had ever fired a missile.  Further, based on the expected nature of air war and our technical developments to intercept bombers at long range, we have lost expertise and continuity in ‘being dogfighters’ … there is a need to establish a fighter weapons school to reverse this trend and to eliminate aircrew and ground personnel error…. The Ault Report (1968)

Book reviews for historical works are mostly written by other authors, historians, or folks with significant knowledge of the subject matter, in this case naval aviators, TOPGUN graduates or instructors. Captain Pedersen’s new book timed with the 50th anniversary of the first Navy Fighter Weapons School class has received many excellent and well deserved reviews, so here I’ll take a slightly different tack.

For me there are four significant threads woven into this anniversary book:

1. The telling of the TOPGUN story by the man charged to put it all together then serve as the first Officer-In-Charge. No matter how well someone may know the story, first in is still first in.

2. Capt. Pedersen’s career beginning with F4D Skyrays, flying F-4 Phantom II’s in combat, and then finishing with command of the aircraft carrier USS Ranger (CV-61), not only explains TOPGUN but also captures naval aviation from just after the Korean War, through the air war events over Vietnam  of Operations Rolling Thunder, and Linebacker I & II, then  proceeds on into the 80’s and the demands of the Cold War and the threat of Soviet bombers to our carriers – a significant different set of technical design needs and operations from those over North Vietnam.

3. Technology, rules of engagement, and tactics interplay had a significant negative impact on U.S. air operations and was a major aspect of the Ault Report. Thus the initial TOPGUN cadre was required to address future air-air tactics as a function of both inadequate AND inappropriate technology.Not only were the MiGs and U.S fighter aircraft based on different mission design requirements. The MiGs were based on point defense (short range, less fuel load, speed and maneuverability). The F-4 in particular, was required for fleet defense mission of the carrier or interceptor role. This drove the design towards radar, long range guided missile and specifically away from the need for a gun. The second mission of strike escort required a bigger a/c for fuel/range.The gun/no-gun story is widely known and pilots identification of no gun capability and impact on tactics is a big part of the initial TOPGUN teaching/training requirement. Capt Pedersen addresses the challenges very well, but he also discusses  how the mix of fighter missions (strike and fleet defense) was addressed post-Vietnam in regard to the growing Soviet Backfire bomber armed with long range AS-4 air-surface missiles.
And so for me…

4. Remembered Sky – the whole is more than the sum of the parts. The above explain three “operational threads” not only for TOPGUN but also for the Cold War time frame bracketing the air war in Vietnam. If your interests include carrier aviation, fighter pilots, aviation history or even just Tom Cruise and the movie, Captain Pederson relates a story well worth your time.But whether your personal experience includes TOPGUN instructor or student (I was neither), or fighter or attack naval aviator, or carrier operations across the board, this book hits the sweet spot of carrier aviation memories of great friends, times and places. For me, it was if spotlights suddenly shined on the squadron plaques and pictures on my office wall and great stories and one liners jumped out of the books.  Things I hadn’t thought about in years were again fresh in memory.

TOPGUN and killing MiGs may be Captain Pedersen’s magic carpet, but the flight becomes a whole lot of remembered sky.

For those interested, further background is provided below via links from two different perspectives. First experience is from John Chesire, my friend from USS Midway/CAG 5/VF-151 during the ’72  war cruise site relating his TOPGUN experiences. Second, is an article on the 59th anniversary by famed aviation historian and writer Barrett Tillman.

* My Story:
An Autobiographical Sketch of a U. S. Naval Aviator and Fighter Pilot
by John Chesire