“what did Midway really mean?”

“An aircraft carrier is a noble thing. It lacks almost everything that seems to denote nobility, yet deep nobility is there. A carrier has no poise. It has   no  grace. It is top-heavy and lop-sided. It has the lines of a cow. It doesn’t cut through the water like a cruiser, knifing romantically along… It just plows… Yet a carrier is a ferocious thing, and out of its heritage of action has grown nobility. I believe that every Navy in the world has it as its No. 1 priority the destruction of enemy carriers. That’s a precarious honor, but it’s a proud one.” Ernie Pyle, 1945 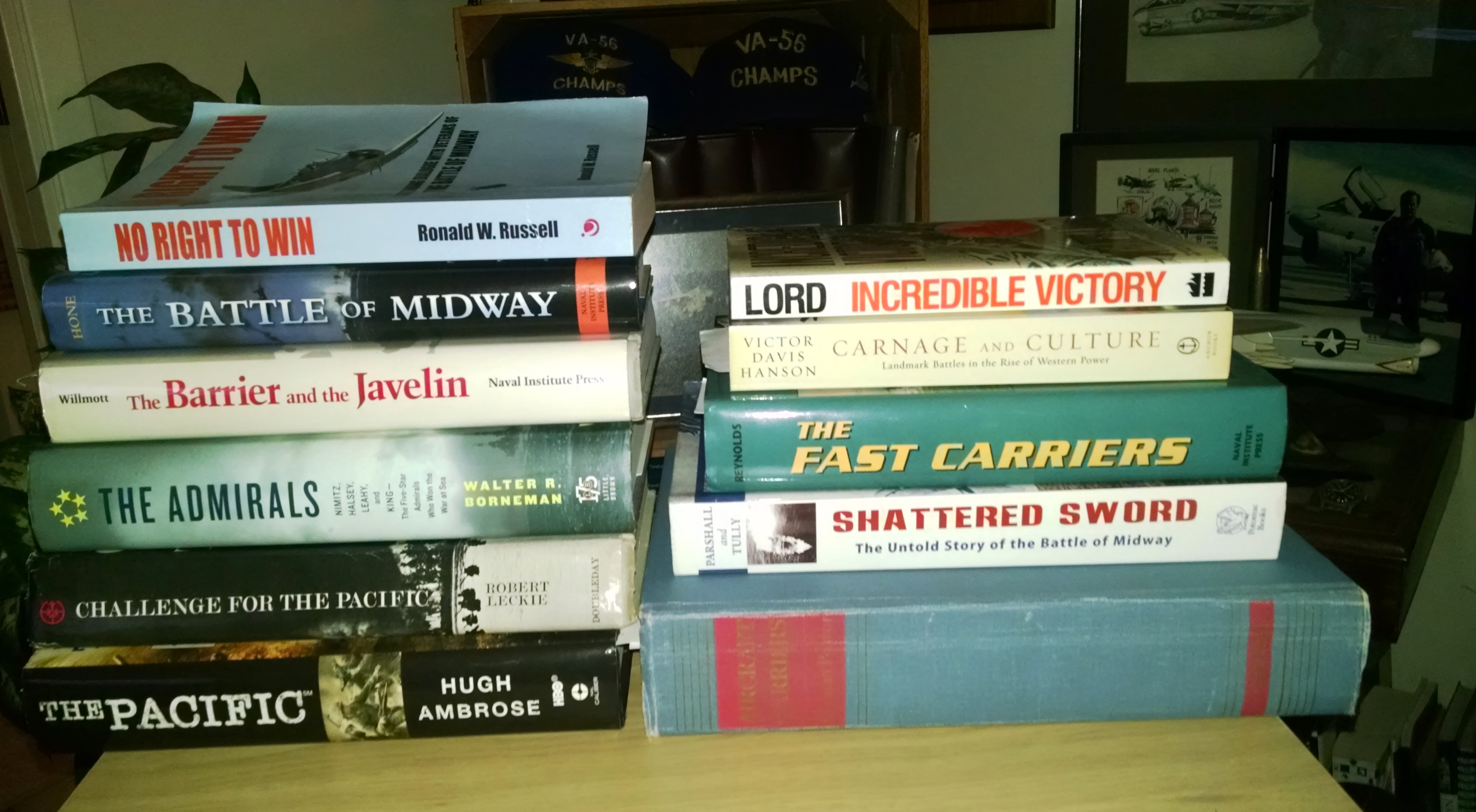 On 13 June USS Enterprise returned to Pearl Harbor. Thus began the celebration, but also, evaluation of the battle operations, the impact on both US and Japanese capabilities and next steps, and of most importance, the beginning of planning to leverage the victory. And so…

“what did Midway really mean?”

Shattered Sword’s authors note that the answer typically comes in three varieties – 1) material, 2) strategic, and 3) counterfactual. The first focuses on the importance of such things as aircraft losses, the loss of skilled aircraft mechanics, and the size of Japan’s pilot training programs. The second analyzes what effect the defeat at Midway had on Japan’s strategy for the remainder of the war. The third seeks to illustrate the importance of Midway by creating “what if” scenarios (some well thought out, some verging on the delusional) that would have changed the outcome of the Second World War in some way, depending on the outcome of this one battle.

Parshall and Tully  considered all three issues in turn, but considered understanding what it meant to Japan to lose the services of four aircraft carriers and their organization and mode of operations by carrier divisions the key to really understanding the battle’s importance.

As in the second piece of the trilogy, key analysis from Sword follows:

The question might better be phrased in terms of what it meant to lose two carrier divisions, in particular Carrier Divisions 1 and 2. Stated this way, the question acknowledges that the Japanese Navy had brought the concept of multi-carrier operations to a higher level of practice than any other navy. It also emphasizes that what was lost was not just “X number” of ships, planes, or men, but rather a well-functioning assemblage of the three. CarDivs 1 and 2 were incredibly complex weapons systems, forged through years of training and experimentation. All the material elements composing these systems need to be considered when assessing the damage suffered on 4 June, 1942.

The losses at Midway certainly did not radically degrade the fighting capabilities of Japanese naval aviation as a whole, which probably boasted around two thousand carrier qualified aircrew at the beginning of the war.’ Rather, it would take the hellish attrition of the Solomons campaign to initiate a fatal downward spiral in Japanese carrier aircrew proficiency, with the Battle of Santa Cruz marking the effective end of the elite prewar cadres.

… (there is also) the negative effects that losing hundreds of highly skilled aircraft mechanics and technicians had on the Imperial Navy. The Midway carriers between them counted 721 aircraft technicians killed, or more than 40 percent of the total number embarked. These men were difficult to replace, given Japan’s less-mechanized mechanized society than that of its foe, the United States. Their loss (in conjunction with the large number of skilled technicians who were later to be isolated and effectively lost at Rabaul during the Solomons campaign) would have a direct impact on Japan’s ability to field a modern carrier aviation force during the battles of 1944.

To the toll of mechanics might also be added the deaths of other essential crewmen, such as flight deck crew, armorers, and other personnel involved in supporting flight operations. These men had trained together for years to reach the highest level of operational proficiency the Japanese Navy would ever attain. This attrition in personnel points to a more abstract loss, namely, that of organizational knowledge. It is not possible simply to conjure up three thousand men, a hundred fifty aircraft, and two carriers and expect them to operate smoothly. Shokaku and Zuikaku discovered this during the early phases of the war.

At a point in the war when Japan needed to be fighting as audaciously and efficiently as possible, the void left by the loss of two senior carrier divisions could not be filled by more junior practitioners.

All of these points have merit. Aircraft were certainly precious to Japan at this point in 1942. And the collective worth of human, organizational, and tactical capital must certainly be borne in mind, particularly in a war in which the Japanese so frequently squandered these important commodities. But the point that gets lost in all this is the critical significance of the flight decks themselves.

It’s almost as if the rush to acknowledge the importance of pilots and airplanes to the new mode of warfare has blinded modern observers to the overwhelming importance of the aircraft carrier as a strategic naval asset. Without flight decks to deliver planes and pilots into combat, the naval aviation revolution was negated, because at a fundamental level, “power projection” absolutely requires a base from which to project it. And it was this mobile base that was by far the most expensive and least expendable component in the overall system.

Carrier air groups are subject to economies of scale. They need to be large enough to scout and to supply defensive fighters to protect the mother ship and still be able to deliver a large offensive punch. Delivering a single attack with, say, thirty-two attack aircraft is almost always superior to sending in two separate sixteen-plane attacks, because larger strike forces have a better chance of saturating the enemy’s defenses. Having a single carrier large enough to launch a decisive strike on its own was an important advantage in this respect. With an air group of twenty to thirty aircraft, light carriers simply did not have enough planes to go around. They could barely screen themselves, let alone deliver an attack of credible size. Furthermore, the shipboard infrastructure necessary to support the air group-repair repair shops, command and control facilities, fueling stations, magazines, and bomb storage rooms-was also more efficiently delivered via a larger ship.

Viewed in this light, it is apparent that the coin of naval power in the Pacific war must be measured by the number of fleet carriers available to the opposing navies.

The importance of these vessels is even more obvious, considering that each of them represented a phenomenal expenditure of national resources…any analysis of the Midway battle that fails to accord the proper gravity to losing the core component of a national defense capability that was fourteen years in the making (i.e., Kido Butai) utterly misjudges the nature of the Pacific war. Big carriers didn’t just grow on trees – losing four of them in an afternoon was tantamount to a national disaster. Particularly within the time frame of the short conflict Japan hoped to fight, these losses were crushing and utterly irredeemable.

A corollary to the loss of these four ships was the permanent loss of tactical homogeneity in the Japanese carrier force.

… despite being able to field nominally similar numbers of carriers in 1942 and 1944, Japan’s carrier force never remotely approached the balance, cohesiveness, and striking power of Dai-Ichi Kido Butai at the beginning of the war. Men and planes could be replaced, but the four Midway carriers could not. Their loss permanently ruined what had been the most successful Japanese naval weapon system of the war, and hence must be ranked as far and away the most important material loss of the battle.

Thus, H. P. Willmott noted in his analysis of the Battle of Coral Sea that the balance sheet for the engagement had to be assessed not materially, but rather “in terms of the demands made on resources by time and distance. The ability to concentrate mobile forces to dictate the direction and tempo of future operations was the all-important factor in the conduct of the Pacific war. The true cost of the battle was not to be found in calculations of ship losses but rather in contrasting the effect of the battle on the carrier forces.”

This calculus applies equally well to Midway, and the true locus of that battle’s downstream effects rightly lies in the waters off Guadalcanal. Japan had entered the war with the intention of eventually moving to a barrier defense backed by mobile carrier and air forces. The real litmus test of Japanese strategy was therefore to capture what was needed while preserving its strategic mass for as long as possible. As was noted earlier, the best way to preserve mass is to use it en masse instead of doling it out in penny packets.

After Midway and the exhausting attrition of the Solomon Islands campaign, Japan’s capacity to replace its losses in materiel (particularly aircraft carriers) and men (especially well-trained pilots and maintenance crewmen) rapidly became insufficient to cope with mounting casualties, while the United States’ massive industrial and training capabilities made losses far easier to replace. The Battle of Midway, and most importantly the Guadalcanal Campaign, is widely considered the turning point in the Pacific War. But even with the pilot, ship’s company, and carrier losses, Yamamoto and the IJN moved on to fight viciously in trying to retake Guadalcanal. Midway certainly did not doom their war-fighting capability, but had they won, the remainder of 1942 and the capability and willingness of Admiral Nimitz to go on the offensive most certainly would have played out much differently.

As a final note it is worth recalling how new this type battle was. Despite Admiral Yamamoto’s success with carriers at Pear Harbor, in the Indian Ocean and throughout the Pacific in early ’42, and reputation as a leader of this new mode of naval warfare, his plans for Midway were based on taking the island, thus drawing out the US carriers for a decisive battle with his major kill mechanism, not the carriers but his battleships.

On the U.S. side, the TF-16 and 17 commanders – Admirals Spruance and Fletcher were surface officers, and indeed many of the  captains were those who had gone through pilot training to become familiar enough with aviation to fill senior command billets but were not seasoned fighter, bomber or patrol experienced. How to most effectively employ sea based aviation was really in its infancy. Carrier confrontations of a similar nature but with some very different aspects awaited at Guadalcanal. Victory would be painful. (Guadalcanal Part #9)

The US Navy may have been forced away from battleship dominated war-at-sea because of the losses at Pearl Harbor, but the battles of Coral Sea and Midway provided the bona fides of a capability that exists even today, 76 years later – most navies in the world- if they should choose to oppose the United States – must have  as their No. 1 priority the destruction of USN aircraft carriers.

This entry was posted in Year of the Carrier and tagged Aircraft Carriers, Battle of Midway, War-at-Sea. Bookmark the permalink.