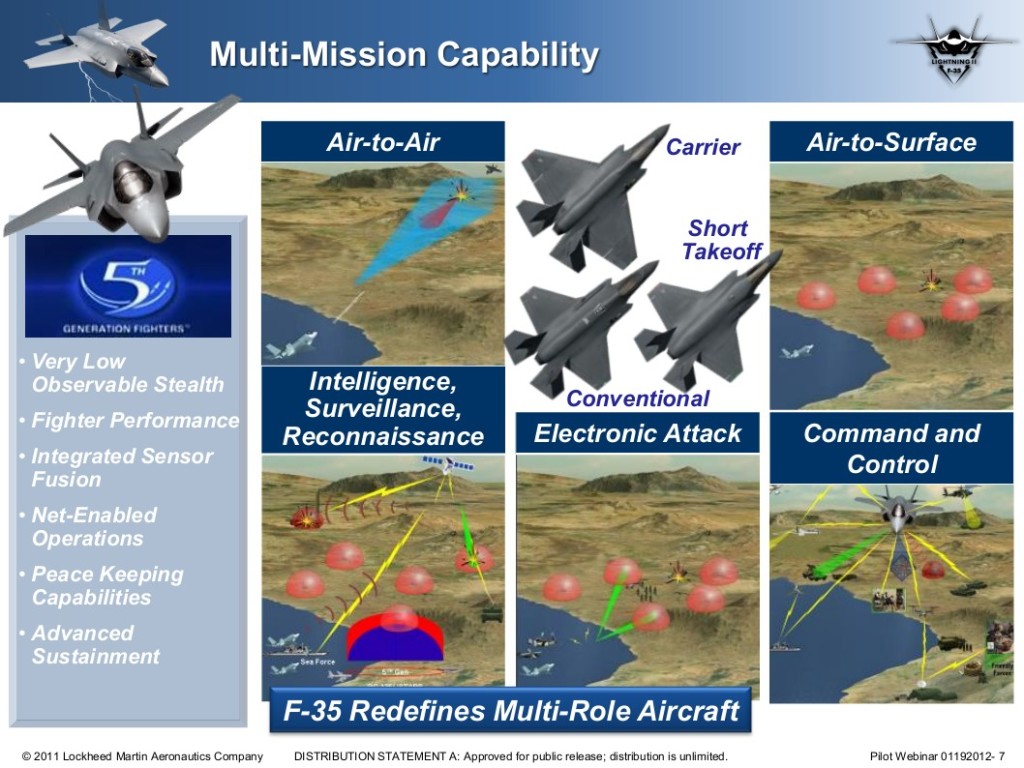 Air to air is what you do going into and coming off of the target. Ed Rasimus, Air Force Vietnam War F-105 and F-4 fighter pilot

In the previous post, I suggested as a thought experiment that one draw a straight line graph comparing fighter aircraft performance/capabilities over time beginning with WWI and say the Sopwith Camel, then continue through WWII with your choice of best fighter (Spits, Zero, Mustang, Corsair), on into the Korean War and the MiG-15 and F-86, then to Vietnam and the MiG-21 and F-4, and next on to the F-14/ F-15/16/18 group. I suggested that you would not find the F-35 on an extension of that line. Irrespective of cost, schedule or development problems, it is a different type “fighter” plane with intent to conduct air combat in a different way.

The last a/c on that line would be the F-16 and F/A-18.( The F-22 is a departure along the way to the F-35 as a Fifth Generation fighter). These two a/c are the results of the mid 70’s Light Weight Fighter (LWF) competition between the YF-16 and YF-17. With the Cold War  ongoing, it’s understandable why the focus was entirely centered on air to air warfighting and dogfighting capabilities. 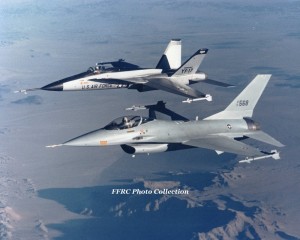 While the Air Force selected the F-16 to compliment the F-15 and the Navy decided on a variant of the YF-17 to become the replacement a/c for both their fighter F-4’s and attack A-7’s, both a/c very quickly were adapted as multi-role “strike fighter” type combat aircraft.

The current manifestation of airwar is predominantly air to ground and day-day in the Middle east it’s primary focus is support of ground troops or attack on fleeting insurgents “hiding amongst the people.” That is certainly not to say that if air combat is required with Russia or China, that serious air-air won’t be a major aspect of war in the air, and that contingency can not be overlooked or minimized without dire consequences.

Since the war in Vietnam, the emergence of surface to air  missiles (SAMs) as a major defense threat has grown exponentially. Returning from Vietnam, attack aviators knew from experience that their A-4’s, A-6’s and A-7’s had numbered days. Indeed the Air Force had always focused on afterburner a/c for both air-air and air-ground.  Their version along with life time upgrades of the F-4  is a perfect example. Unlike the Navy whose Phantoms were designated for strike support from air-air threats and fleet defense, but were integrated into strikes thus carrying bombs on occasion, AF Phantoms were considered multi-role fighters from earliest introduction. In Vietnam, focus was a function of the wing and base location. 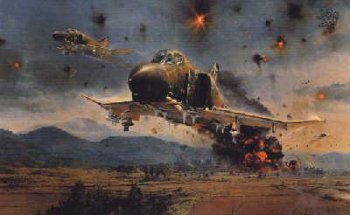 The MiG pilots are a lot better than the average German pilot toward the end of WWII….Sometimes, when they’ve forced us to jettison our bombs before reaching the target, we’ve had to go in and teach them a lesson or clear them out.  But our basic job over there is to bomb targets, not chase MiGs. If they happen to get in the way, so much the worse for them. Robin Olds

So with the growing (mostly Russian developed) SAM threat,  Survivability  would demand future a/c be designed with significant increase in thrust to weight and weapons and sensor capability that would allow more stand-off in weapons delivery. While the Navy evaluated two separate versions of the YF-17 for fighter and attack roles, in the end it just made sense cost wise to develop the F/A-18 Hornet as a strike fighter. In essence, when you increased thrust to weight with afterburner, no matter what else, you had inherently an air-air capable fast mover, and certainly at minimum a self-escort capability.

As noted the desire for a light weight, cheap, highly maneuverable air-air fighter for the Air Force, very quickly became a jack of all trades AND has been very good at a multitude of missions including taking over the SAM suppression/destruction role.

Late Air Force Colonel John Boyd – he of Energy Maneuverability theory, noted by many as father of the F-16, OODA Loop concepts and Patterns of Conflict warfare concept development – noted that men fight wars and use their brains, therefore proper priority is men, ideas, and then technology.

With the advent of the computer, networks and overall information technology growth in capability by leaps and bounds, the military and defense contractors cannot but chase what could be game changing potential. But in fairness, many warfighters have justifiable concerns on plans to carry out warfare more as a function of the wonderfulness of technology in place of the experienced-based focus “manning the equipment vs. equipping the man.”

That said, one cannot ignore the level of threat provided by technology in prosecuting war in the air. Tactics of WW II, Korea, and Vietnam will get aviators killed. The technical difficulties of the radars and radar guided missiles (Sparrow for example) of Vietnam days are long gone. The dogfights of historical aviation can still occur, (and still train for) but are highly unlikely as evidenced in the 40 some-odd air-air kills beginning with Desert Storm.

We near the end of Airpower Analysis by Boris mostly because “how to fight in future air-warfare” is rightfully carefully protected and not open to unclassified debate or writing. But researching what is available tells me that application moves into a different line of thinking and action. It’s not off the mark to consider a new norm in air combat being established.

In that light, the next post in this series should be enlightening – the debate between retired LtCol David Berke (USMC) and Pierre Sprey conducted by Aviation Week. Berke is unique in his flight experience in that he’s instructed at TOPGUN, flown the F-16, F/A-18, F-22 and F-35. Sprey was a participant in the Light Weigh Fighter program and heavily involved with the A-10 program development. Their views of airpower are significantly different